As it becomes increasingly apparent that the prosecution’s case against Kyle Rittenhouse is weak and he will likely be acquitted, leftists, who have slandered Mr. Rittenhouse as a vigilante and murderer since the events in Kenosha, are getting increasingly angry. Some are even preparing to riot if he is acquitted, which is very likely.

Some call for rioting and looting of the sort seen after George Floyd’s death if he’s acquitted. Others are calling for the death of Mr. Rittenhouse himself. Many are calling for violence of any sort. Here are some examples of those calls for violence: 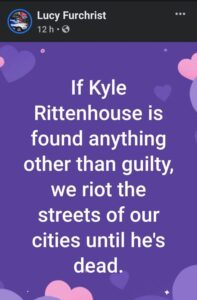 And the police seem to be taking those calls for violence as more than idle chatter. In fact, as Tim Pool reported on his podcast, riot police are gearing up for yet more BLM riots:

Tim Pool’s report is backed up by an article in the Chicago Sun-Times, which reports that Chicago’s police are being put on standby in case of massive riots:

The Chicago Police Department has canceled regularly scheduled days off starting Friday and through the weekend in apparent anticipation of civil unrest in the event that Kyle Rittenhouse is acquitted.

[…]“All RDO personnel will be attired in the prescribed regulation field uniform of the day, including helmet, baton and yellow safety vest,” said the memo, dispatched by a sergeant on behalf of First Deputy Police Supt. Eric Carter.

John Nolte added to that report, writing about the sad irony of it for Breitbart and saying that:

Because Chicago is run by Democrats, because the corporate media have been shamelessly lying about the truth of what’s been revealed in the Rittenhouse trial, Chicago police know that if Rittenhouse is acquitted (as he should be), the left-wing terrorists in Antifa and Black Lives Matter, these dangerous babies who can’t deal with things not going their way, are almost certain to take to the streets to loot and burn in the name of social justice or something.

To which I can only say lol.

First off, while I certainly don’t wish riots on any neighborhood, it’s hard not to laugh at the irony of this. Leftists rioting in leftist cities where everyone’s voted Democrat for decades; where left-wing policies are enacted with no opposition…. So where’s the utopia everyone was promised?

As The Informed Youth reports, the problem for the left, the problem creating such outrage and vicious calls for violence, is that the prosecution simply doesn’t have a good case against Mr. Rittenhouse, who only fired upon his attackers when he was forced to defend himself from a horde of angry Antifa goons:

The prosecution against Rittenhouse is falling apart, mainly because there was no place for this trial to begin with. Prosecutors have had a hard time pinning any blame on Rittenhouse because the evidence has revealed that this incident is one of the most open-and-shut cases regarding self-defense in history. During the trial, it has been revealed that rioter Gaige Grosskreutz pulled a handgun on Rittenhouse. The rioter conceded that he was not shot until he had done so. Another rioter who was shot and killed was also revealed to have been lunging for Rittenhouse’s gun. This evidence hammered yet another nail into the prosecution’s grave.

Unfortunately, this isn’t the first time leftists have threatened to riot if the outcome of a trial is something other than what they might like. During the trial of police officer Dereck Chauvin, for instance, BLM agitators threatened to repeat the chaos and rioting that rocked America after George Floyd’s death if Chauvin was acquitted. Apparently, some Americans would rather threaten the justice system with violence than see blind justice served.

The post Leftists are Preparing to Riot if Rittenhouse is Acquitted appeared first on Trending Politics.