The NYT’s “1619 Project,” authored by Nikole Hannah-Jones, is widely regarded as being full of lies, half-truths, and misleading statements. Supposedly a work of revisionist history, in reality, it’s little more than the opinions and ramblings of an anti-American fool.

Jones proved her status as such a fool yet again, this time when discussing the American Civil War. As ZeroHedge reports:

The creator of the revisionist ‘1619 Project,’ Nikole Hannah-Jones, who has long argued that pretty much all complex modern issues – from obesity and traffic jams to capitalism itself – is the result of racism being at America’s core, apparently has yet to grasp the simple dates for the Civil War. With the recent release of the much anticipated book formed out of her popular essay series, The 1619 Project: A New Origin Story, academics and educators have hailed it as laying the groundwork for upending and transforming the way the United States’ foundational story of its beginnings as a nation is told, even down to impacting how elementary school teachers present America’s founders to school children.

The book assures us that “the inheritance of 1619” – that is slavery, racism and social injustice – “reaches into every part of contemporary American society, from politics, music, diet, traffic, and citizenship to capitalism, religion, and our democracy itself.” Given her outsized influence as a New York Times writer, and now that she’s being held up in mainstream media and even establishment academia as an ‘expert’ on American history, it’s not too comforting to know that she doesn’t know the basic dates for the Civil War.

And why was ZeroHedge making the allegation that Jones doesn’t even know the basic dates of the Civil War? Because she made a fool of herself yet again, this time on Twitter, where she said this: 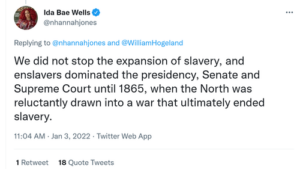 “We did not stop the expansion of slavery, and enslavers dominated the presidency, Senate and Supreme Court until 1865, when the North was reluctantly drawn into a war that ultimately ended slavery.”

What a fool. The American Civil War began in 1861. President Lincoln was far from an “enslaver.” And of course the Union was unwilling to jump into a war that killed about 600,000 Americans.

Yet worse than her stupidity is that she doesn’t seem to recognize how dumb she is. As of January 4th, a full day after the original tweet and all the criticism it spawned, it’s still up and remains uncorrected.

Why should Americans be supposed to learn from the material of a woman who doesn’t even know basic dates from American history?