I am convinced that Ketanji Brown Jackson did not expect to be nominated for the Supreme Court, at least this early in her legal career, but life is funny like that.

Now as a Supreme Court Justice nominee, Jackson’s 1992 Harvard University thesis is being used in vetting her. In it, Jackson argues that court officials, including judges, have “personal hidden agendas,”

Jackson’s thesis, “‘The Hand of Oppression”: Plea Bargaining Processes and the Coercion of Criminal Defendants,” argued that defendants sometimes are “being coerced into relinquishing their constitutional rights as a prerequisite for sentencing consideration” through the use of plea bargains.

The GOP Senators on the judiciary committee are using her own words when asking the judge questions about her reported leniency on criminals as a federal district court judge.

There is a chance that the very institution which is designed to dispense justice and to protect individual rights could be the most guilty of creating injustices in its effort to make criminal adjudication economical and efficient. This thesis will examine guilty plea negotiations in modern criminal courts in the United States, and will argue that, as they currently operate, plea bargaining processes are both coercive and unacceptable.

In her thesis, the DC Court of Appeals judge argues that it is necessary to examine the motivations, or “hidden agendas,” that underlie the attempts to “get the accused to waive their constitutional rights” through plea bargains.

Jackson wrote, “We must endeavor to identify the ‘motivation of individual decision-makers exercising delegating authority’ both as support for the assertion that the process is pressure-laden (Chapter Two), and as a premise for the argument that the pressures themselves are unacceptably coercive (Chapters Five and Six).”

It is possible that “[t]he people who run the criminal justice process and the decisions that they make are more likely to serve their interest rather than the system’s clients.” Within a social institution of such tremendous power and influence, statutorial and ideological concepts have the potential to be manipulated by individuals for personal gain.

And though “people can justify their [actions] in the name of the collective good,” they may actually be attempting to “disguis[e] a vested interest. ” Before we can effectively analyze plea bargaining, we must attempt to identify the personal hidden agendas of various court professionals.

Jackson’s argument that court officials have “personal hidden agendas” regarding plea bargains raises questions about her time as a federal district court judge, as many Republicans have accused her of being soft on criminals.

Sen. Marsha Blackburn (R-TN) said Jackson was very lenient on crime during the coronavirus pandemic. She alleged that Jackson was partial towards criminals and terrorists:

At the start of the pandemic, you advocated, and again I quote, for “each and every criminal defendant in the D.C. Department of Corrections custody should be released.” That would have been 1500 criminals back on the street if you had had your way. And you used the COVID-19 pandemic as justification to release a fentanyl drug dealer, a bank robber addicted to heroin, and a convict who murdered a U.S. Marshal into our communities. But your efforts to protect convicts began before the pandemic. You used your time and talent, not to serve our nation’s veterans or other vulnerable groups, but to provide free legal services to help terrorists get out of Gitmo and go back to the fight.

So far the democrats on the committee and Jackson herself have tried to downplay GOP Senators Blackburn, Lee, Kennedy, Cotton, and Cruz’s arguments.

During Tuesday’s testimony, Judge Ketanji Brown Jackson said she’s “not sure” if critical race theory (CRT) is being taught at Georgetown Day School, an elite private Washington, D.C., school where she serves on the board of trustees.

During his questioning of Jackson, Sen. Ted Cruz, R-Texas, said he found it “a little hard to reconcile” Jackson’s previous comments about CRT and the fact that she serves on the board of a school that promotes the concept. 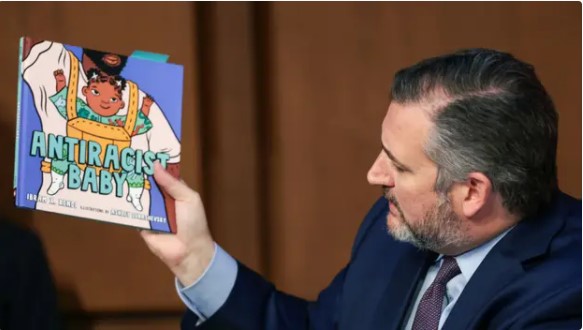 Jackson said the board does not control the curriculum and she was not aware of the theory being taught there.