Joe Biden doesn't like us saying this, so we put it on a shirt!

On August 28, 1963, Martin Luther King Jr famously spoke – “I have a dream that my four little children will one day live in a nation where they will not be judged by the color of their skin, but by the content of their character.”

Fast forward to 2021, the social justice mob and cancel culture have a different take on equality. Instead, they are demanding “equity”, at the expense of “privileged” white Americans.

On Wednesday, NBA on TNT Social Strategist Victoria McBryde posted a tweet seeking a “young, gifted, and Black” college student for an on-air position connected to the Oscar Pope Lift Every Voice Fellowship.

In an obviously discriminatory tweet, those who are young, gifted, and of any ethnicity other than black, were by default, now allowed to apply for the new on-air position at the NBA on TNT.

#LETS GO BRANDON!
Have you seen this? Get your shirt HERE before they run out.

Here is the screenshot of the tweet which has been moved to private following the backlash from Twitter users. 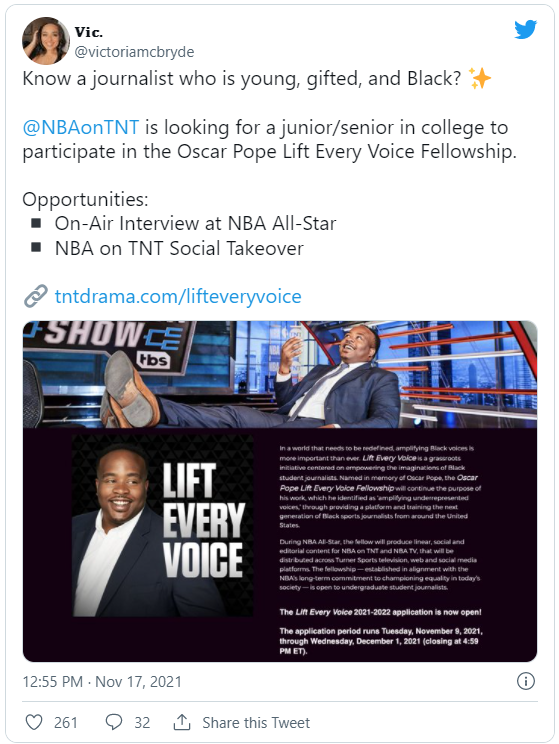 TNT’s top NBA journalist Chris Haynes is black. Three of the four members of TNT’s Inside the NBA pregame show are black. In addition, Turner Sports’ Bleacher Report has made Taylor Rook, a black woman, the face of its brand.

Meanwhile at ESPN, the NBA’s other major partner, seven of the eight members of its pregame program, NBA Countdown, are black. In fact, the Worldwide Leader of Sports has just two former journalists working in opinion roles on ESPN’s NBA bumper programming: Stephen A. Smith and Michael Wilbon, both of whom are black. And Malika Andrews, a black female journalist in her 20s, replaced Rachel Nichols, a white woman, to be the host of ESPN’s signature daily NBA show in the fall.

To Victoria McBryde and other young college-trained Marxists, their efforts to advance opportunities for black Americans is necessary to correct the economic injustices they say have taken place all the way back to the founding of our nation.

FREE MUG TODAY - If this flag offends you, then I'll help you move!

Even if the advertisement was not intended to be racist, this exclusion of any qualified applicant, based on race, should be universally wrong.

If it was to become culturally acceptable and legal, we could expect overt racism to re-appear in the South, negating some of the work MLK Jr and others worked and some even died for.