Months before Andrew Cuomo resigned back in August of 2021, it had become apparent that something inappropriate and potentially illegal had happened. The former New York Governor had a bad habit of touching women and saying things that are downright creepy coming from your boss. When you’re fully investigated by members of your own party, it’s pretty much the end for your career.

If they won’t help you, who will?

In Andrew Cuomo’s case the answer was his younger brother, one of the few stars of CNN, Chris Cuomo. At first it appeared that Chris told his bosses everything. He admitted to helping his brother out and knew that it was wrong to do so, but hey, family comes first. CNN appeared to appreciate that and even went so far as to announce it to the public and acknowledge that it was bad behavior. At the time, it didn’t even seem like CNN would be doing anything about it beyond a minor slap on the wrist with an indefinite suspension on November 30th, 2021. 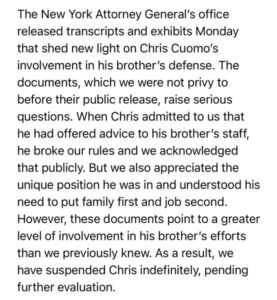 Unfortunately for both brothers, Chris wasn’t nearly as a forthcoming as his bosses thought he’d been. Turns out, he did a lot more than give some advice to his brother on how to handle the media regarding the upcoming scandals. He did more than just prep the Democrat on what he should say or how he should say it.

Chris Cuomo attempted to get as much information about his brother’s accusers and tried to determine who they had spoken to, and if they were being taken seriously. He even went to members of the press to get that information and more! Because of the information that came to light about just how involved Cuomo was with helping his brother “navigate” the scandal, CNN made the decision to terminate the news anchor on Saturday, December 4th, 2021.

But that’s not all, folks. Chris has decided he’s going to sue the pants off CNN. Deciding to drop the kicked-puppy routine, Cuomo is instead going for the much more realistic attack-dog routine. Why? Because he was never sorry to begin with. If you pay attention to his tweets, he never actually apologized or acknowledged any wrongdoing.

Below are two tweets he posted. The first was on December 4th, 2021 when he was initially fired. The second is two days after on December 6th to discuss where his radio talk-show career is headed (I’ll give you a hint, its start with “no” and ends in “where”).

According to Fox News, Chris Cuomo plans to sue CNN for at least the $18 million that’s left on his contract. As you can tell from the second tweet, there is a lot more at stake for the younger Cuomo than just his CNN pay and severance. To make matters even worse and definitely more embarrassing for the former anchorman, his book deal was cancelled on December 7th.

The book that was slated to come out in Fall of 2022, “Deep Denial”, was going to be published under HarperCollins, and was said to be “a provocative analysis of the harsh truths that the pandemic and Trump years have exposed about America — about our strength and our character — and a roadmap of the work needed to make our ideals match reality.”