Most news sources have been doing everything in their power to avoid being censored, kicked, booted, demonetized, restricted, or banned from various social media outlets. They do this by avoiding specific conversations or keywords in posts, status updates, tweets, and so on.

For example, instead of referring to COVID-19 or Corona Virus as such, people called it “the vid” just to fool the algorithms that were searching for keywords. That didn’t last long. Next came the vaccines, which were not at all “fact-checked” while Trump was running for a second term. The moment Joe Biden won, everything changed. Suddenly you couldn’t say anything negative about vaccines. Most people started using the terms “jabs“, “shots“, and even more vague language trying to get around the pesky out of context, missing context, false information or misinformation warnings.

Slightly off topic, but still within the “Facebook working hard to prevent misinformation” scam, is a new warning that comes up when you try to post certain articles. While this is meant to make sure that you aren’t missing key facts, do note that this warning has come up on people who have read the article and tried to share it. This has happened to me multiple times, and only on articles with a decidedly “conservative” perspective. 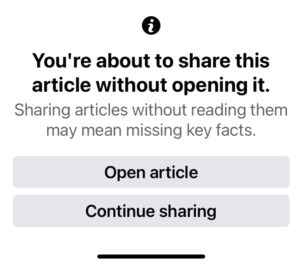 Users even noticed that Facebook had begun to fact check actual memes! For those of you who may not spend much time on the internet, memes are one or more images along with some clever wording to make a joke. That’s right, Facebook started having their “independent fact-checkers” police jokes. 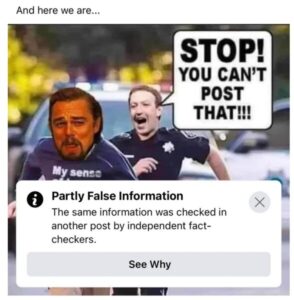 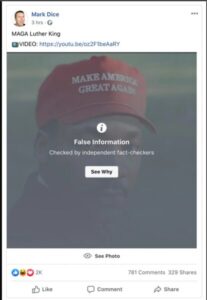 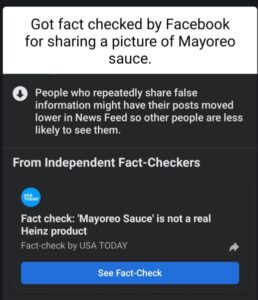 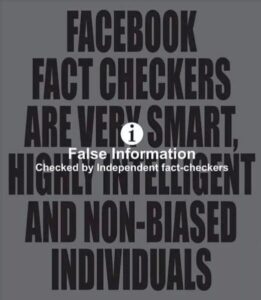 Just kidding on that last one.

Most of the above you may know already, especially if you are a Facebook user. What you might not be aware of is that Facebook is being sued for their fact-checking by journalist John Stossel.

In the seven-and-a-half-minute video, John reminds people that it’s not just himself being censored or banned through “fact-checking”, but several scientists as well. His basic argument is that if you say something that Facebook or it’s sponsors don’t like, you’re out. That’s all there is to it. Watching the video, you can certainly understand why he’s frustrated.

On December 13th, 2021, John Stossel wrote about Facebook’s response to his defamation lawsuit. According to him, Facebook’s lawyers claimed that the “fact-checks are merely opinion and therefore immune from defamation.” John reasonably points out that Facebook has always portrayed the checks as facts.

“Each time a fact-checker rates a piece of content as false, Facebook significantly reduces the content’s distribution … We … apply a warning label that links to the fact-checker’s article, disproving the claim.”

Once more, the obvious is clear for all to see in their own statement. They apply a warning. They provide a link. They pay someone to “disprove” the claim. How is that not fact? At the very least, how is not represented as fact? In what world does that sound like an opinion?

Stossel continued, “The company, which now calls itself Meta, also asked a judge to toss my lawsuit “because Section 230 of the Communications Decency Act protects Meta from liability for material posted to the Facebook platform by third parties.”

“But it was Facebook, not just a third party, that declared my posts “partly false.” Facebook’s warning was created by Facebook and posted in Facebook’s voice.

“As Facebook’s own website says: ‘We … apply a warning label …’”

Below is a link from Facebook’s own page that discuss their methods and how they do their fact-checking.