Wen said, “I think what we will see with Omicron is a very large number of infections due to Covid-19.” 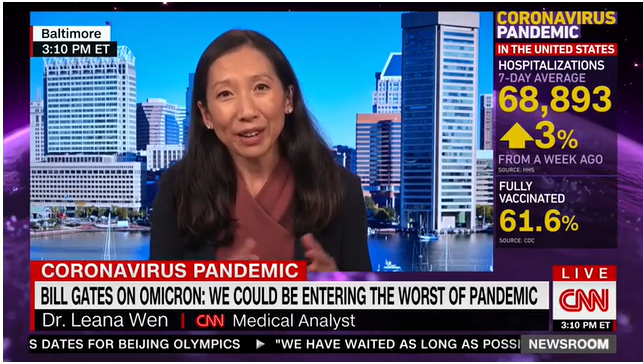 And so, if we’re able to avoid overwhelming our health care systems, that would be the goal. Is there going to be a lot of people who get Omicron? Absolutely. But the hope is that enough people have been vaccinated in some parts of the country and many parts of the world that we’re going to prevent the worst of it.”

Wen added, “I do have a lot of concern about what happens to parts of this country, for example, that have very low vaccination rates. This is another reason why I think President Biden’s message yesterday was the right one in some way — in saying vaccinated people should move on with their lives with precautions. But I wish that he would go further to restrict the activities of the unvaccinated because they are the ones who are still spreading COVID and prolonging the pandemic for all of us.”

She did several other interviews on various networks, repeating the same message, that Biden should target the unvaccinated and restrict their movements, like the fascist nation of China she originates from.

Former Planned Parenthood head, Dr. Leana Wen is upset with Biden because he didn’t go into “all the things that should be done to restrict the activities of the unvaccinated.” She then argued for a two-tiered society to “really focus on restricting the unvaccinated.” pic.twitter.com/yQJxqjajbg