On October 2, 2021, racing driver Brandon Brown was being interviewed by NBC Sports reporter Kelli Stavast at the Talladega Superspeedway in Alabama. Following his victory in the NASCAR Xfinity Series Sparks 300 race which was shortened due to darkness. Fans were chanting “F*** Joe Biden”, and this became clearly audible to viewers of the broadcast.

On the live broadcast, while wearing a headset, reporter Stavast stated, “You can hear the chants from the crowd, ‘Let’s go, Brandon!’”. It is unclear whether Stavast misunderstood the chant or whether she intentionally misquoted it as “Let’s Go Brandon”.

Following the broadcast, a wave of anti-Biden sentiment has taken over the nation with the “Let’s Go Brandon” chant heard nearly everywhere. In an attempt to take advantage of the movement a NASCAR driver applied to drive under a sponsorship featuring the slogan.

In confirmation of NASCAR’s move to the left, the organization has rejected driver Brandon Brown’s sponsorship with “Let’s Go Brandon”- inspired cryptocurrency meme coin LGBcoin since the popular saying is a slight against President Joe Biden. 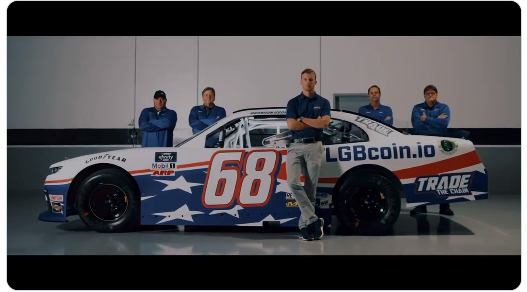 According to The Washington Post, a NASCAR official said the organization “made clear during a November discussion about the potential sponsorship that it would not allow any reference or imagery based on the chant.”

“NASCAR on Tuesday decided against approving a sponsorship based on the anti-President Biden slogan ‘Let’s go, Brandon,’ according to a NASCAR official with direct knowledge of the deliberations,” the Post report said.

The official told the Post that “NASCAR’s formal decision was not a reversal … but the governing body’s first and final word on the matter.”

“The misunderstanding over the sponsorship thrust NASCAR into an unwelcome political spotlight for several days,” the Post report said. “While segments of stock-car racing fans relished the prospect of cheering a car emblazoned with an insult of the president, such messaging would have run counter to NASCAR’s efforts to prevent stock-car racing from being used as a backdrop for partisan politics and divisive imagery.”

“We received written approval on the sponsors from a NASCAR Racing Operations official on December 26, 2021,” Marcucci said in a statement. “The team subsequently moved forward with an announcement only after being provided with this approval.”

“The sponsor approval was unambiguous — the first four words of the email from NASCAR state, ‘The sponsors are approved,’” the statement read. “The only feedback offered was related to minor graphic design changes to ensure legibility on the track at 170mph.”

Subsequently, Brown’s team made the announcement on social media.

I’m excited to welcome @LGBcoin_io aboard my No. 68 Chevrolet Camaro as our 2022 NASCAR Xfinity Series full season primary partner!

NASCAR’s position now is that Brown was given approval by an employee who did not have the authorization to do so. The Post reported:

[T]he announcement was premature, apparently based on an okay granted over the Christmas holidays by a NASCAR employee who was not authorized to sign off on the relationship.

The news is no doubt another hit to Brown, who revealed last week that it has been difficult for him to find sponsorship, due to the political nature of the chant associated with his name.

“It got extremely difficult for us,” the driver told Sports Business Journal. “If you’re a national corporation, that means you sell to all consumers … and unfortunately, when you get dragged into the political arena, people want you to take a side I’ve never been put in a position where it’s, ‘OK, what side are you on? Left or right?’ So it’s hard for a brand to want to attach to somebody who might be kind of divisive in their consumer base.”

Considering all the various ways the left has attacked President Trump, NASCAR’S reason to not allow “Let’s Go Brandon”, is a slight against President Joe Biden is weak and another WOKE moment for a major sports platform.