The onslaught of illegal activity through our elections, immigration, and education systems is overwhelming for the average American to track or process.

Hundreds of Americans sign sworn avadavats following the 2020 presidential election. They reported violations of their specific state’s election laws, duplicated ballots being inserted into the machines, ballots dropped doof around 4 am in the day following the election day, 90 plus percent going for Biden ETC.

In spite of all the data, the courts have not wanted to touch the “hot potato” and have chosen to ignore their testimony, thus hamper the pursuit of the truth.

Last Monday the Arizona Senate reconvened. During a Senate session, the discussion turned to the UOCAVA voters — the voters covered under the Uniform Overseas Civilian Absentee Voting Act. These are the men and women who are serving their country in the military and send in a mail-in vote from where they are stationed outside the country.

During the hearing, Paul Harris, a Maricopa resident, and veteran in corporate executive management spoke to the committee. Harris was a manager during the audit of the Maricopa County audit of the 2020 election ballots.

Paul Harris was tasked with overseeing the UOCAVA ballots during the audit. He described his experience.

Paul Harris: The UOCAVA is the Uniform Overseas Civilian Absentee Voting Act ballot. That ballot is sent out to men and women who work overseas and the people who work overseas to get a chance to work in the election. This is what a ballot looks like that goes out, an 11 1/2 X 19 ballot. When I opened up a box of ballots this is what a ballot looks like that’s a UOCAVA ballot. You know what that is? It’s an 8 1/2 X 11 sheet of copy paper.

Paul Harris continued: “Did you all know that our ballots come back like this from our overseas people? Did any of you know thia? It is such a sham that I had people everyday at my table taking pictures of these ballots that were scanned down. It took my team three complete days to count all of the UOCAVA ballots.

You know why? Because in 2016 the numbers were apparently 1,600 UOCAVA ballots that came back in the most significant election in our lifetime. In 2020 the numbers were close to 9,600 ballots that came back. And I will tell you as an eye-witness, 95%… all went towards one candidate. And in a state where a candidate won by 10,000 votes that is 8,000 new votes during an election where people were brought home because there was a pandemic… No chain of custody. There’s nothing to identify where this piece of paper came from.”

President Trump was ahead of Joe Biden in Michigan on election night when all of a sudden they stopped counting votes.

At around 4:30 AM AFTER Election Day, a massive ballot dump of more than 130,000 votes appeared for Joe Biden in Michigan. 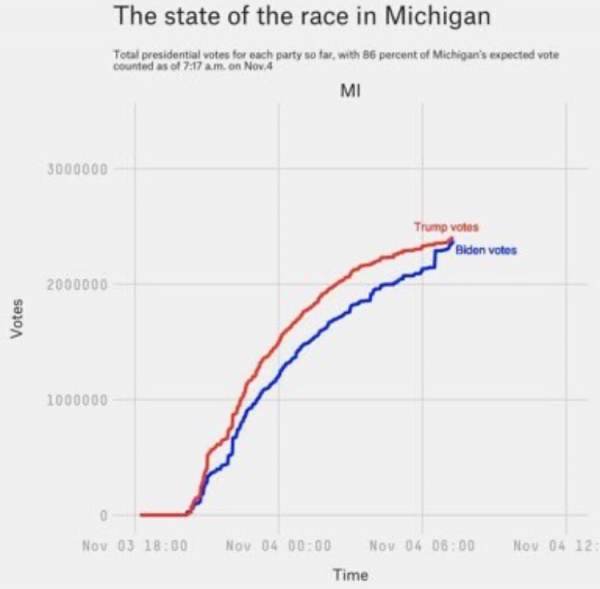 One GOP elections observer on Tuesday said all of the military ballots she saw looked like “Xerox copies” of each other – none were registered Michigan voters and 100% went for Joe Biden.

The witness, Patty McMurray, described her experience at the TCF Center on Wednesday morning.

“Not one of the military ballots was a registered voter and the ballots looked like they were all exactly the same Xerox copies of the ballot – they were all for Biden across the board, there wasn’t a single Trump vote and none of the voters were registered, “witness Patty said. “They had to manually enter the names, addresses, enter birthdate of 1/1/2020 which would override the system and allow them to enter non-registered voters of which I saw several that day, throughout the day, that’s how they would override voters that were neither in the electronic poll book or in the supplemental updated poll book.”

This disregard of the government in ignoring the citizenry is alarming and part of the reason I believe we must deconstruct our massive government, reducing it back to strong states and a small federal governmental system, for Liberty’s sake, by 2025.