In less than a decade, the far left has been able to force the removal of historic landmarks, rename schools, force sports teams to change their names, are have recently started working in WOKE Disney.

The family-friendly company Walt Disney started, now in an apparent move to increase their globalist ESG score, has begun implementing several progressive changes across its entire company, from adding racism warnings to several of its classic movies – including Peter Pan and The Jungle Book – to encouraging white staff members to ‘decolonize their bookshelves’ as part of anti-racism training.

Disney has come under fire after debuting a ‘woke’ new look for Minnie Mouse, who was created almost 100 years ago, in 1928, wearing her famous red and white polka-dot dress. Well, it’s 2022, and the companies radicals have decided to replace Minnie’s dress with a more gender-neutral ‘progressive’ blue pantsuit designed by Stella McCartney.

Disneyland Paris unveiled the famous character’s new outfit on Tuesday via Twitter, announcing that Minnie has undergone a high-fashion makeover in honor of its 30th anniversary.

Stella created the new ‘sustainable’ costume for Minnie in honor of Women’s History Month, which takes place in March, and in celebration of the French park’s anniversary, explaining that the ensemble is meant to transform the cartoon into ‘a symbol of progress for a new generation’. 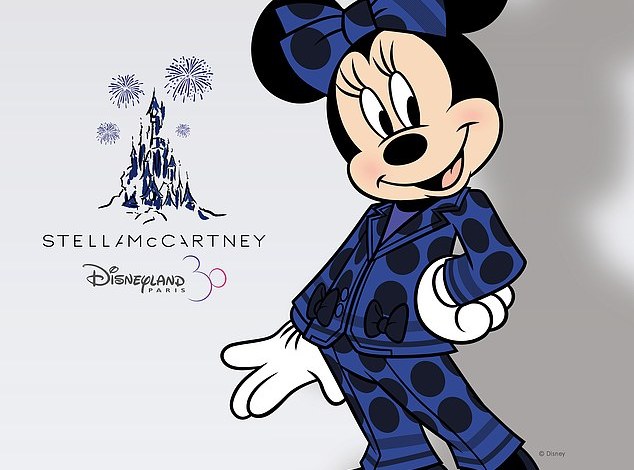 However, the move has been met with uproar online, where many are questioning why Minnie has been given a ‘woke’ new makeover, which comes in the same week that Disney found itself at the center of another furor over its upcoming live-action remake of Snow White, and amid increasing outrage over the studio’s haphazard attempts to present a more politically-correct image.

The change was met with a very cold shoulder from fans, launching a vicious attack against the company – with one person calling Minnie’s new look ‘more woke BS.’

Some even compared her ‘fit to something that former First Lady Hillary Clinton would wear.

Another added: ‘People: “Hey Disney, you should actually give gay/queer characters storylines and also maybe pay your employees a livable wage.”

‘I was never a Disney mascot fan but WTF?’ someone else said. ‘A covert Hillary homage or just woke pandering run amok.

‘What’s next, will she transition into a Michael so Mickey can full express himself?’

Earlier this week, Disney also angered fans when it announced that in its upcoming live-action remake of Snow White they will feature ‘a different approach’ to the seven dwarves that appeared in the original story.

What is unknown is if will Disney’s radical team will go all in inserting homosexuality or a new “gender identity into any of the dwarfs, further alienating former Disney fans who are moving quickly away from “The Happiest Place On Earth”.

Disney has chosen to ignore a significant amount of their customer base, those who love traditional America.

Though my family was Disney season tickets holders in California for years, with their increasing involvement in deconstructing our culture, we will not be returning to any of Disney locations moving forward.