Sydney authorities have come under fire in recent days as it emerged that lifesaving technology which could have spared the life of the British swimmer mauled by a Great White last week were never deployed.

Royal Air Force veteran Simon Nellist, 35, was training for a charity swimming event last Wednesday afternoon off Little Bay Beach, Sydney, when he was attacked and mauled to death by a 4.5m Great White Shark, the first fatal attack in Sydney for 60 years.

The horrifying attack which was caught on video by helpless fisherman on the shore only lasted a matter of a few seconds but authorities responding to the incident reported there were only “body parts” left of the swimmer.

A great white shark mauled a swimmer on a beach in Sydney, Australia. Later, rescuers found human remains in the water. This is believed to be the first fatal shark attack in Sydney in nearly 60 years.https://t.co/bfw2BnHWWb

Despite the promise that new shark alert systems would be installed in time for the Australian summer, the tech was not installed by Randwich Council until last Thursday, when six SMART drumlines were deployed in a bid to find the shark responsible for the attack.

Australian Minister for Agriculture Dugald Saunders insisted there was no “delay in the rollout of our drumline program”, but with Australian summertime now drawing to a close, many are critical they were not deployed sooner.

Another 15 drumlines were set up in the area over the weekend. More shark nets and listening stations are also being set up along the Sydney coastline.

As sharks are an endangered species, the use of shark nets are controversial as they not only result in the death of sharks, but also indiscriminately destroy other ocean life.

Mr Nellist – a Scuba diving instructor who, according to his devastated Scuba buddy Della Ross, loved the ocean – was himself critical of the shark deterrent systems. He posted to Facebook:

“Shark nets and drum lines protect no one and kill all kinds of marine life every year.”

There is also video footage of Simon Scuba diving alongside numerous huge sharks. His friend Della explained to Seven news: “Everything connected to Simon is connected to the ocean’.

“He loved the water. He loved diving”.

Although often used in conjunction with harmful shark nets, the SMART drumlines themselves are not invasive methods of control either to sharks or other species. Instead, they work by attracting the sharks with bait. If a shark is detected, the drumline sets off an alert signal beacon which can be seen on the shoreline – allowing officials to alert those in possible danger.

Alert text messages and emails are also sent by the SMART technology to alert researchers and necessary contractors of a shark in the area. 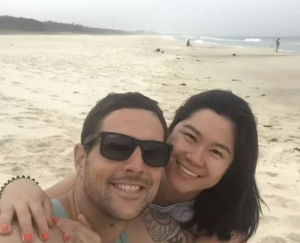 Originally from Cornwall in the South West coast of England, Simon Nellist was engaged to be married to his fiancé Jessie Ho later this year, but his 62 year old aunt Jacqui Seager said she was sure he wouldn’t have wanted the shark responsible for his death to be slaughtered:

“I don’t think Simon would want the shark to be killed. He loved nature.

“He swam with sharks before. This isn’t the first time he’s gone out and seen them but he would still go out swimming. That’s brave.

“I don’t think he ever thought they would hurt him. Sadly, this time it managed to get to him.

“It’s absolutely horrendous. We are all in shock.”