Eighth grade students at John F. Kennedy Middle School in Connecticut were set a bizarre school assignment which told them to select pizza toppings based on their least and most favorite sexual acts, including “kissing” and “giving oral”.

The school came under fire when concerned parents took to social media to voice their disgust at the paper entitled ‘Pizza & Consent’, which was designed for kids as young as thirteen.

According to Fox News, the assignment showed photos of pizzas along the top of the page, along with options; “Enthusiastic – It’s a genuine ‘YES’ and a strong want and desire from all involved”, “Fluid – It’s active and collaborative”.

“We can use pizza as a metaphor for sex”, it says.

“When you order a pizza with your friends, everyone checks in about each other’s preferences, right?

“The same goes with sex!

“You’ll never know if your wants, desires and boundaries are compatible with theirs unless you ask.”

Incredibly, the assignment went on to ask students to color-in a drawing of a pizza, selecting toppings based on what their sexual desires might be. It gives the examples of “cheese=kissing” and “olives= giving oral”.

One mother known only as ‘Amanda’ uploaded a YouTube video in which she asks the potent question: “Since when has it become acceptable for a teacher to ask a student what their sexual wants, desires and boundaries are?” 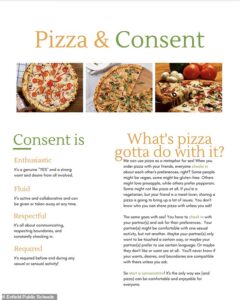 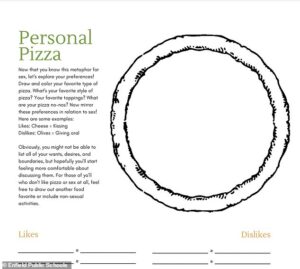 During a school board meeting on Tuesday, other parents said they felt sex was being pushed on their children at a disturbingly early age. Tracy Jarvis said:

“‘We should not be encouraging youth to explore each other’s bodies with multiple partners in an open environment for any reason.

“If somebody is doing that or asking them to do that, they should tell a responsible adult, who then reports it.

“I understand we need to teach kids boundaries, but you are giving them way more information than they are psychologically ready to handle at this age”.

Jarvis went on to say that by encouraging children to explore sexual desires, “you open up doors for them to have partners that are older than them, increasing statutory situations”.

The assignment was released in January and uploaded onto the Enfield School District’s website, but was promptly deleted after the social media uproar which entailed, with District Officials insisting the paper was uploaded “by mistake”.

The district’s Health and Physical Education Coordinator, Brie Quartin, emailed parents to apologize, stating that the “intended version” had not been uploaded to the school website:

“I caught the error after our curriculum revision in June, but failed to post the intended version. I own that, and apologize for the error.”

The school’s Superintendent Christopher Drezek echoed Quartin’s response during the board meeting on Tuesday, ensuring parents that the assignment was only uploaded “inadvertently”.

“The truth was it was a simple mistake,” he said, according to FOX News. “And I know that there are some who may not believe that.”