Like a scene from a disaster movie, you can imagine a deafening blast followed by the infamous mushroom cloud associated with a nuclear impact.

Twitter is stunned at this interactive map reveals what would actually happen if a nuclear bomb was dropped in your area, but the US government’s AI systems go above and beyond.

The terrifying simulation map allows you to ‘try out’ different sized bombs on any location around the world. Simply drop a pinpoint on the globe, select your bomb, click the ‘detonate’ button, and the NUKEMAP will estimate the impact including number of casualties and radioactive fallout.

Should a ‘Tsar Bomba’ – the weapon dubbed the ‘King Of Bombs’ which was tested by the Soviet Union – detonate in Manhattan, the interactive map estimates 8,077,290 deaths and a further 6,671,580 injuries, with a fireball radius of over 6km. 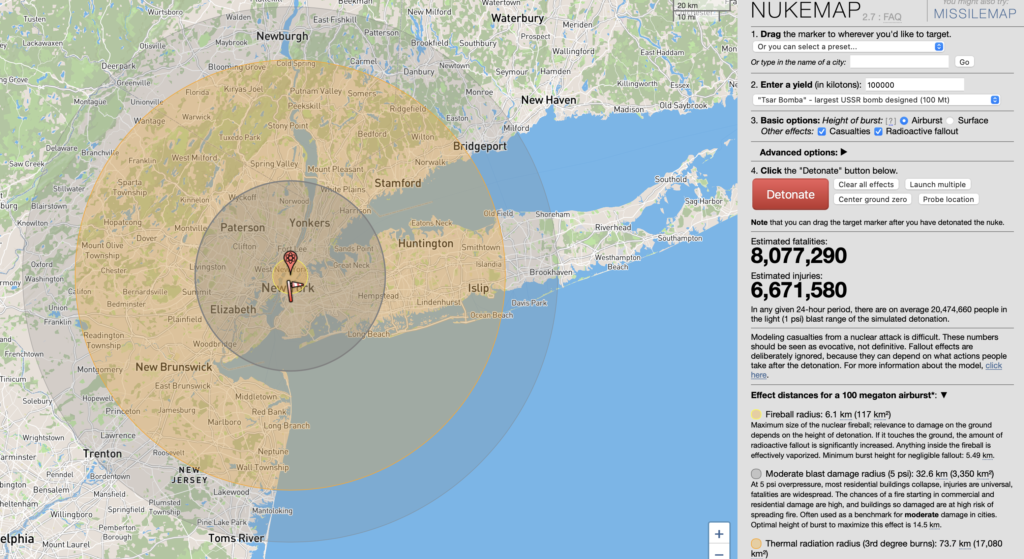 The impact zone would stretch as far as New Jersey to the South and Newburgh to the North.

There are a number of other real-life bombs which Russia, North Korea and the USA have tested available to simulate on the map.

The NUKEMAP may seem clever to us, but according to Science.org, the US government’s nuclear simulation system is somewhat more sophisticated.

Far more advanced than the NUKEMAP, the model known as the National Planning Scenario (NSP1) includes a digital simulation of every building, road, hospital, school and power-station.

The technology known as an ‘agent-based model’ incorporates a synthetic human population and even takes into account the demographics of the people in the affected area such as occupation, sex and age.

It then provides an autonomous reaction from each digital human – provided they survived the initial impact –  such as panic or attempting to find members of family.

The NSP1 AI model is said to provide by far the most accurate simulation of the spontaneity of real-world disasters or attacks, but the same technology can be applied to predict less frightening scenarios.

The agent-based model can be used to predict outcomes related to topics as diverse as economic, transport, health or structural development.

Speaking to Science, Ira Longini who models epidemics as the University of Florida said: “They’re the most flexible and detailed models out there which makes them by far the most effective in understanding and directing policy”. 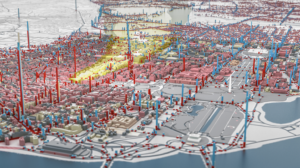 While agent-based AI models are extremely effective in their method of gathering simulated data, the technology is usually too draining to be used en masse – with each single model keeping a 500-microprocessor computer cluster working for a day and a half.

With Putin edging ever-closer to inciting a war in Europe, the West can’t help but recollect the constant threat of nuclear missiles during the Cold War.

While sophisticated AI systems may predict the outcome of a nuclear blast, little has been done to utilize the technology to help prevent human casualties.