While Freedom Convoy protesters have remained calm and peaceful throughout their lengthy campaign, leaked messages from Canadian cops show the officers joking about their colleagues battering peaceful protesters and trampling them with police horses.

The messages were uncovered by Rebel News, and have not yet received official verification. In them, officers connected to the Royal Canadian Mounted Police appear to gloat about a video in which a Mountie knocks an elderly woman to the ground with his horse and then forces the animal to trample over her.

In the group chat one officer allegedly exclaims: “Just watched the horse video – that is awesome!”

“We should practice that maneuver”. 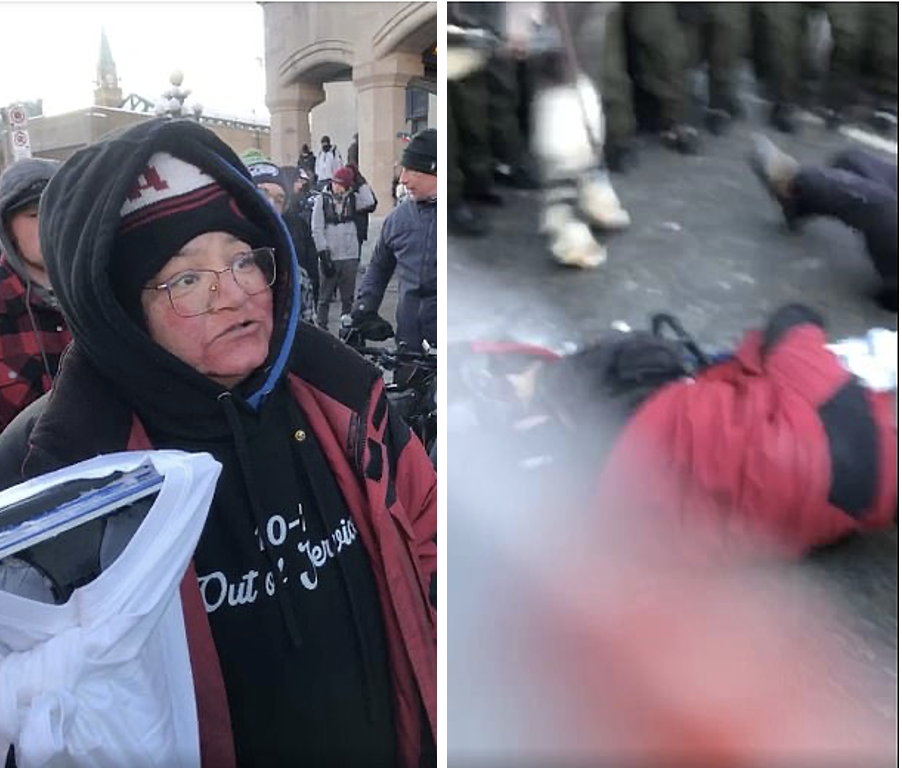 Others in the sickening chat log replied: “Put me back on Gyro and they will get served”.

“Don’t kick all of them out until next weeks group gets our turn,” quipped another, alongside a picture of himself toasting with a beer.

The elderly woman seen trampled in the video was reportedly a grandmother who, before the incident, told another campaigner who was recording footage of the event that she was there to campaign for a better future for her grandchildren:

REPORT: Canadian Mounted Police trample a woman in the streets of Ottawa. pic.twitter.com/moJo5u4WVb

It comes after Justin Trudeau ordered officers to clamp down on those involved in the protests which have rendered numerous areas in Canada impassable over the past weeks.

Cops in riot armor chased protesters away from Parliament Hill in Ottawa on Tuesday using pepper-spray, rubber-bullets and mounted police to clear the city streets.

The crackdown resulted in nearly 200 arrests including campaign organizers Tamara Lich and Pat King. Some 115 vehicles were also seized.

Numerous other clips and personal admissions have circulated on social media showing horrendous violence and brutality by cops against seemingly peaceful campaigners.

Romanian-born truck driver Csaba Vizi can be seen in a video appearing to show police brutally beating him after he had already peacefully surrendered. He said of the incident:

“They were squeezing me slowly, slowly. I felt like I was beaten, but I took it like a man,’ he continued.

“They broke my body a little bit, but not my spirit”.

The family of Gerry Charlebois, a 4’10” great-grandfather of 78, who was videoed being roughly handcuffed and manhandled by police for honking his horn in support of the protest has said he now suffers from PTSD as a result of the incident.

In a statement to the Daily Mail last Sunday, the RCMP did not confirm or deny the authenticity of the vile messages reportedly displayed on the chat group, but said it was “‘aware of the material circulating on social media pertaining to a chat group that includes some of its members”, and gave their assurance they were “looking into the matter”.

The statement went on to say that the “material is not representative of those who have committed themselves to serving Canadians with integrity and professionalism, “and that the RCMP had “put in place measures to ensure the continued integrity of police operations as well as the safety of our members.”