Of all the disciplines studied in higher learning, mathematics produces empirical information, AKA facts, which provides trustworthy data for engineers, accountants, and for conducting analysis of information.

Skyscrapers are built using math, it helps determine the amount of lift a 747 airliner needs to produce to get the massive aircraft off the ground, and in a new study, analyzed data shows how successful the COVID “stop the spread” measures have been.

According to economists in a new meta-analysis of dozens of studies, lockdowns had “little to no effect” on saving lives during the pandemic — and “should be rejected out of hand as a pandemic policy,”

A group led by the head of Johns Hopkins Institute for Applied Economics analyzed studies from the first surge of the pandemic to investigate widely pushed claims that stringent restrictions would limit deaths.

Instead, the meta-analysis concluded that lockdowns across the US and Europe had only “reduced COVID-19 mortality by 0.2% on average.”

“While this meta-analysis concludes that lockdowns have had little to no public health effects, they have imposed enormous economic and social costs where they have been adopted,” the professors wrote in the journal Studies in Applied Economics.

Worse, some of the studies even suggested that limiting gatherings in safe outdoor spots may have been “counterproductive and increased” the death rate, the authors noted. 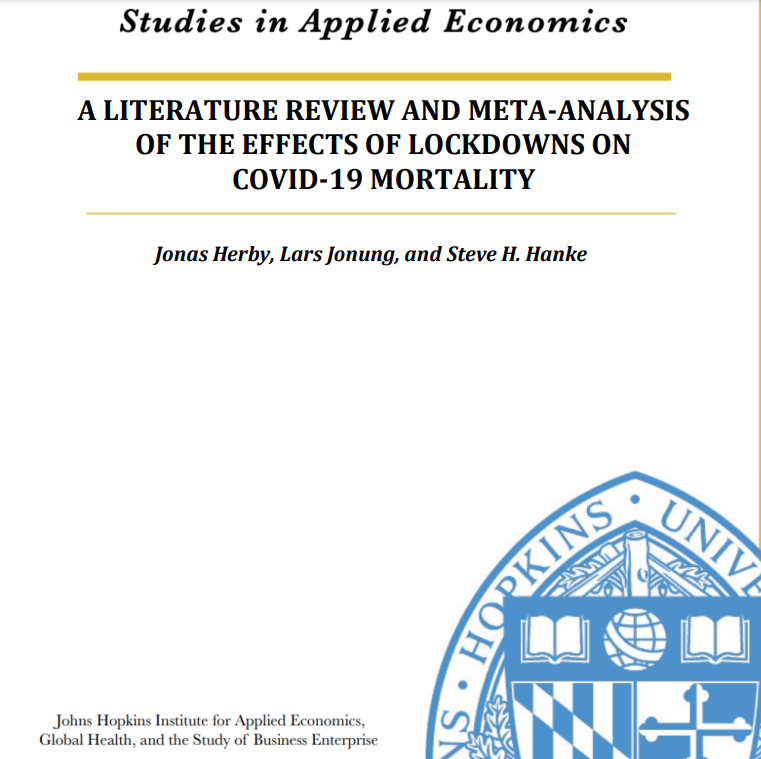 However, they determine closing “nonessential” shops were the most effective intervention, leading to a 10.6 percent drop in virus fatalities.

Their report, which has not been peer-reviewed, said that this was probably due to shutting pubs and restaurants where alcohol is consumed. School closures were linked to a smaller 4.4 percent decrease.

The researchers — who deal in the field of economics, rather than medicine or public health — originally identified 18,590 global studies into lockdowns, which they claim had to be whittled down to just 24 to answer their research question.

Most scientists believe that, before the arrival of vaccines and antivirals, lockdowns had a significant effect on cutting transmission and therefore reducing the number of hospital admissions and deaths caused by Covid. But there has been a growing consensus that draconian restrictions have led to a rise in non-Covid deaths, thought to be people whose conditions worsened during the pandemic when they could not access healthcare.

Critics have accused the study of ‘cherry-picking’ studies to suit the author’s narrative and have raised doubts about the biases of its authors.

The Covid restrictions have battered the US economy.

Inflation spiked to 7 percent in the US in December.

Covid-related supply problems have driven up the price of goods.

The national debt exploded to $31.3 trillion after the Biden administration implemented modern monitory theory, leading them to borrow excessively during the pandemic. As a result of overheating the economy, many economists are now warning about a significant recession probably starting in 2022.

They suggest that lockdowns may have greater unintended consequences than was previously thought.

In response to the data and low mortality rate of those infected with Omincrom, nations such as Ireland, France, Denmark, and other European nations are dropping their COVID restrictions.

With the results from this study, I say it’s time for the U.S. to do the same nationally.