The Adele TERF wars continue on social media today as many in the Trans and LGBT community deny ever having called Adele anti-transgender, instead accusing anti-trans activist of stirring up hatred.

When the BRIT Awards made the announcement they were doing away with separate male and female artist awards this year and instead would issue a gender-neutral ceremony, there was bound be heated debate on social media from the off-set – but when Adele made her acceptance speech, Twitter debate exploded.

Pop icon Adele, 33, took home three awards at the BRITs on Tuesday evening, but controversially during her acceptance speech maintained that she was proud to be a woman, despite the gender-neutral push by the award organizers:

“I understand why the name of this award has changed, but I love being a woman and being a female artist—I do! Insisted the star.

The speech seemed to delight the live audience at the BRITs who erupted in a delighted applause, but Twitter users soon vented their fury at Adele’s snub at gender-neutralism.

All the commotion seemed to stem around a Tweet (now deleted) posted by a user called OhHeyJacob which said:

“That last comment, though ambiguous, could be perceived as TERF-y. Please no.” 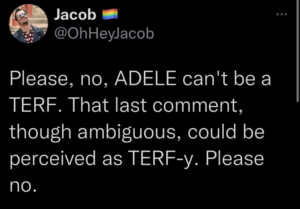 A TERF, as defined by dictionary.com, is a “trans-exclusionary radical feminist:  an advocate of radical feminism who believes that a trans woman’s gender identity is not legitimate and who is hostile to the inclusion of trans people and gender-diverse people in the feminist movement”.

Many Twitter users, including those in the trans-community, jumped to Adele’s defense, reminding the accusers that “women’s rights are trans-rights”, while others quite understandably exclaimed, “what the heck is a TERF?”

What is “TERF-y” about a woman being proud of her sex? What happened to respecting everyone’s identity? She’s a proud female. Good on her

As the debate continued and more mainstream media coverage ensued, social media users in the trans-community became disarrayed with the accusations that they as a collective group had labelled Adele as anti-trans, instead insisting that this interpretation had been whipped up to stir ‘transphobic’ hatred.

“One account run by a cis-man said she was enabling TERFs and the papers decided she was cancelled. No trans people are remotely bothered”.

Except she’s not. One account run by a cis man said she was enabling TERFs and the papers decided she was ‘cancelled’. No trans people are remotely bothered.

While @donna_deeUK said “This totally untrue. Not one single one of us is remotely concerned regarding Adele’s comment, in fact we support it wholeheartedly. As women, why wouldn’t we? Please report facts and not dangerous conjecture”.

The BRIT awards controversially announced that it would end the separate award categories for male and female artists in November last year. BRIT Chairman Tom March said the move was to make it “as inclusive and relevant as possible”.

How this move will affect female artists’ chances against their male counter-parts in the future is yet to be seen. There are serious concerns going forward that female artists may be snubbed in award ceremonies previously accused of male dominance.