A woman who travelled to Bali, Indonesia is lucky to be alive after a video went viral of her unwittingly cradling one of the world’s deadliest animals.

Kaylin Phillips shared the video on her TikTok account, where it racked up millions of views and thousands of comments as shocked viewers were amazed at her narrow escape.

In the video, Phillip wrote text explaining that she was ‘’unknowingly’’ at the time holding the tiny but deadly venomous animal, which can be seen crawling over the palms of her hands as she stands in shallow water.

Phillips posted the caption: “called my Dad crying 3 hours later in Bali”, suggesting she unaware just how lucky she was until later.

In the comments, Phillips continued to amaze shocked user as she posted she had “held two in the same day”and that she and her friends had “tried to feed them oranges and played with them for a solid twenty minutes”.

According to Ocean Conservancy, there are four species of blue-ringed octopus all of which live in the western Pacific and Indian oceans.

They can be found in the sandy bottoms of shallow rockpools and reefs or hiding in crevices in the rocks.

Living up to its name’s sake, if it feels threatened, tiny bright blue rings appear all over its body to warn off predators – as seen in Phillips’ video. If that doesn’t work, its bite contains venom which is “1,000 times more powerful than cyanide and this golf-ball sized powerhouse packs enough venom to kill 26 humans within minutes”.

CNET lists the blue-ringed octopus as the third most venomous creature in the world behind the Inland Taipan and the box jellyfish.

There is no known antidote to blue-ring octopi’s venom, and once bitten, within minutes the victim will experience “nausea, vision loss or blindness, loss of senses and loss of motor skills. Ultimately, it will cause muscle paralysis—including the muscles needed for humans to breathe, leading to respiratory arrest”.

In later videos, Phillips tells viewers that she had gone to Bali three years ago to study and to help produce a documentary about animal welfare. While there she “saw really interesting wildlife”, and as an animal enthusiast Phillips said she was drawn to the colorful sea-creature:

“And I remember when we saw this little guy swim up, we picked him up. There were about three of us passing him around and we didn’t think anything of it.“ 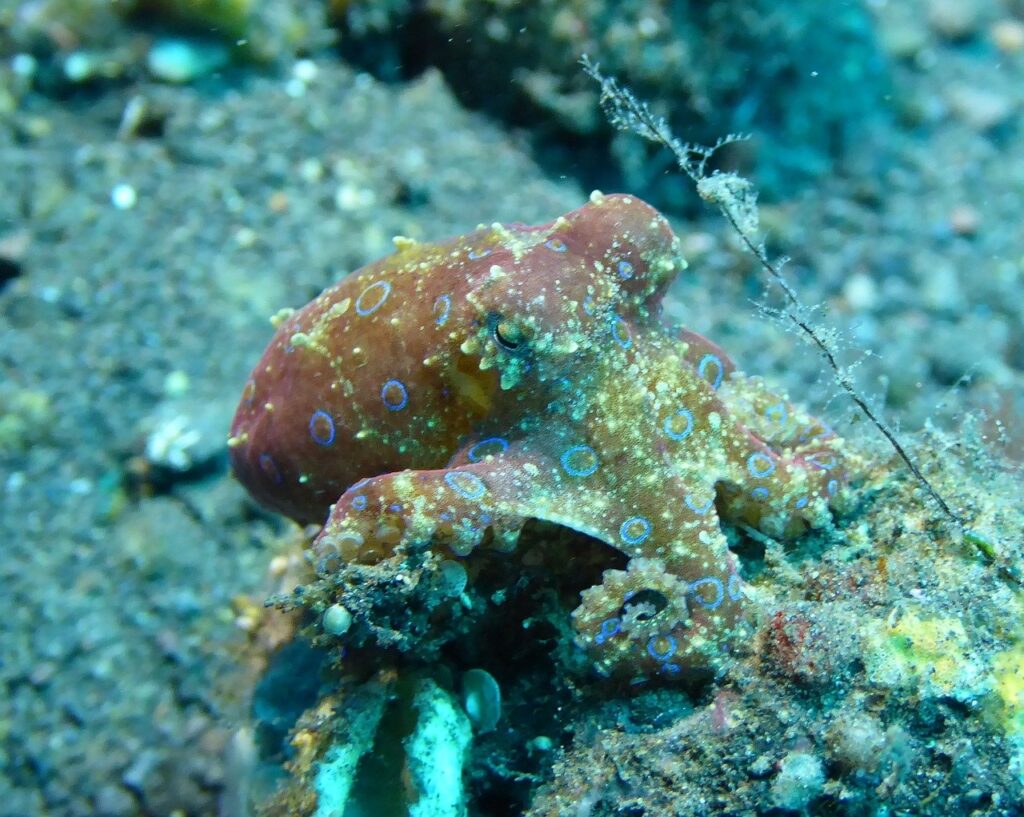 Many social media users were stunned that Phillips had not noticed the animal’s bright colors and realized it could be dangerous. One commenter said: “I’ve watched enough Animal Planet to know that beautiful animals with bright colors are a no-touching zone”.

While Ocean Conservancy gives the assurance that the blue-ringed octopus is not usually aggressive, it terrifyingly concludes that the deadly creature is only likely to bite “if cornered or if handled”. It concludes, “there have been no known deaths from its bite since the 1960s. As long as you keep your hands to yourself, you should be fine”.