On Capitol Hill it appears that every decision comes down to one thing, staying in power.

The democratic party promoted Black Lives Matter, ANTIFA, and the defunding of the police during 2020-2021, but then suddenly stopped when they started losing special elections, as the electorate voted to remove them out of office for these and other reasons.

The left is nervous as polls are showing that the Biden administration’s disastrous Afghanistan withdrawal and COVID vaccines mismanagement are setting up a probable red wave in the upcoming mid-term elections.

In a recent Washington Post/ABC poll, published Sunday, found that President Bidens’s overall approval rating dropped to a new low of 37 percent, and found that approval of his management of coronavirus, specifically, had steadily dropped over the past year, from 64 percent approval last April to 44 percent approval as of February 24.

Biden’s decline in approval of his handling of the virus comes “even as the number of covid cases has dropped sharply and a general easing of mask mandates and other restrictions is underway in many parts of the country,” the Post noted.

In an apparent all-hands-on-deck effort, the Centers for Disease Control quietly walked back some of their masking guidance.

The Centers for Disease Control and Prevention (CDC) announced on Friday that it was scaling back its mask-wearing recommendations. Director Dr. Rochelle Walensky hosted a briefing call with reporters and other scientists to discuss the news.

The CDC changed the criteria for the new guidelines, although reassuring Americans throughout the pandemic they were based on the “data” and the “science.” The guidelines are no longer based just on the number of cases, but rather on the numbers of hospitalizations and new cases.

The congressional update, sent from Attending Physician Dr. Brian Monahan, stated, “The Washington DC region is now in the ‘green level’ or low level in this new CDC schema allowing for reduction in coronavirus prevention measures such as coronavirus testing frequency and indoor mask wearing.”

Read the update below: 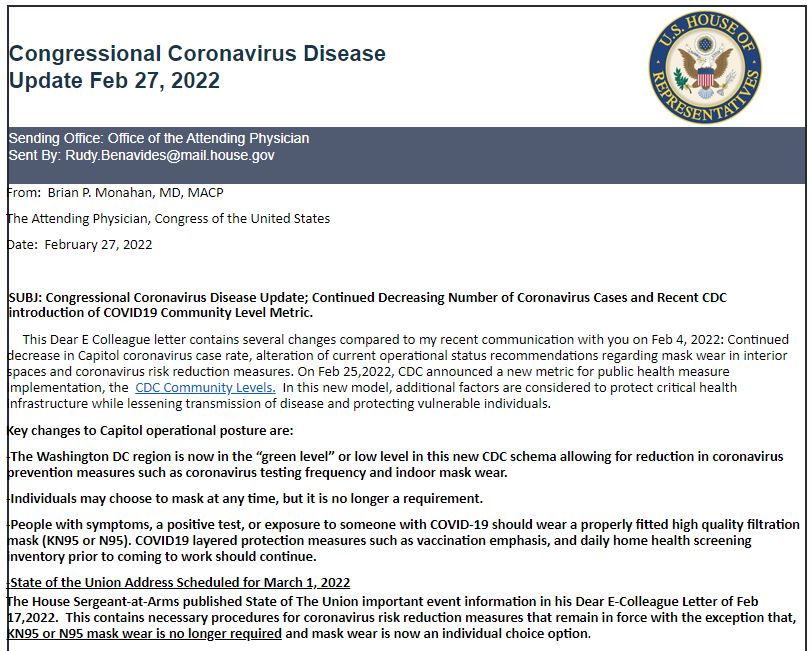 As a result, President Joe Biden’s coronavirus response team and the U.S. House started taking steps to get out of the spotlight right before the State of the Union speech scheduled for Tuesday.

U.S. House Speaker Nancy Pelosi is lifting the mask mandate on Capitol Hill for Biden’s State of the Union speech. The House side of the Capitol building — but not the Senate side — has had a mask mandate in place since July 28.

Monahan noted that for the State of the Union address in particular, other established mandates, including that attendees show proof of a negative RT-PCR test taken within one day of the address, would remain in place.

As governors in deep blue states finally joined in with the rest of the country by dropping mask and vaccines mandates, 70 percent of Americans can now stop wearing masks, socially distance themselves from others or avoid crowded indoor spaces.