Capital punishment has been around since the fall of man, as retribution, justice, against those who have usurped God’s sovereignty by taking an innocent person’s life from them.

Genesis 9:5  Whoever sheds the blood of man,
by man shall his blood be shed,
for God made man in his own image

In the United States, capital punishment has become less popular, especially in liberal states, as they tend to be much more lenient in punishing criminals.

In conservative states though, this is typically not the case.

The South Carolina Department of Corrections (SCDC) announced Friday that it is now ready to conduct death row inmate executions by firing squad.

“The South Carolina Department of Corrections spent about $53,600 to establish a firing squad and renovate its execution facility, according to Department of Corrections spokesperson Chrysti Shain. That includes a number of rifles — exactly how many was redacted in a response to a records request by The Greenville News — and it includes renovations to the capital-punishment facility, stainless steel sheeting, ammunition, and ballistic partitions, according to invoices obtained through the Freedom of Information Act,” the Greenville News reports.

The state’s Supreme Court will now have to approve the way in which the firing squad takes place.

The announcement comes after South Carolina Gov. Henry McMaster (R) signed legislation into law on May 14, 2021, that makes the electric chair the primary means of execution but allows inmates to choose death by lethal injection or by firing squad if the methods are available, the SCDC said in a release.

Three inmates had opted against the electric chair, which automatically scheduled them for execution by lethal injection under the previous law, but the shortage of the drugs prevented the state from carrying out the executions, the Associated Press noted.

In its release, the SCDC said:

The state implemented renovations in the “death chamber,” including a second chair in the corner of the room in addition to the electric chair, which is already in the chamber and cannot be moved. The new chair is metal with restraints and faces a rectangular opening about 15 feet away, which the firing squad will aim through to carry out an execution.

“Three firing squad members will be behind the wall, with rifles facing the inmate through the opening,”.

”The execution team members will be employees of the SCDC and will be required to meet specific criteria, the SCDC said. 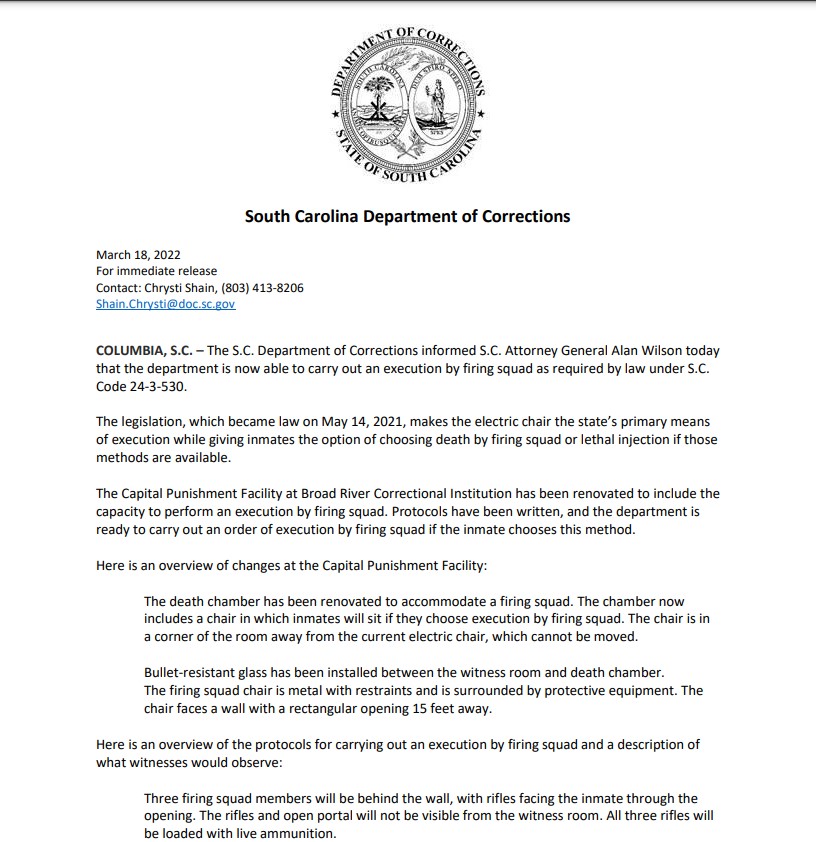 After the inmate is escorted to the death chamber, he or she will be allowed to make a final statement.

Witnesses, who will be behind newly installed bullet-proof glass between the witness room and death chamber, “will see the right-side profile of the inmate. The inmate will not face the witness room directly,” the release states. The inmate, wearing a prison uniform, will be strapped into the chair and a hood will be situated over his or her head. A firing squad member will place an aim point over the individual’s heart.

The execution team will fire after a warden reads the execution order, and a doctor will examine the individual following the shooting. “After the inmate is declared dead, the curtain will be drawn and witnesses escorted out,” the SCDC said. 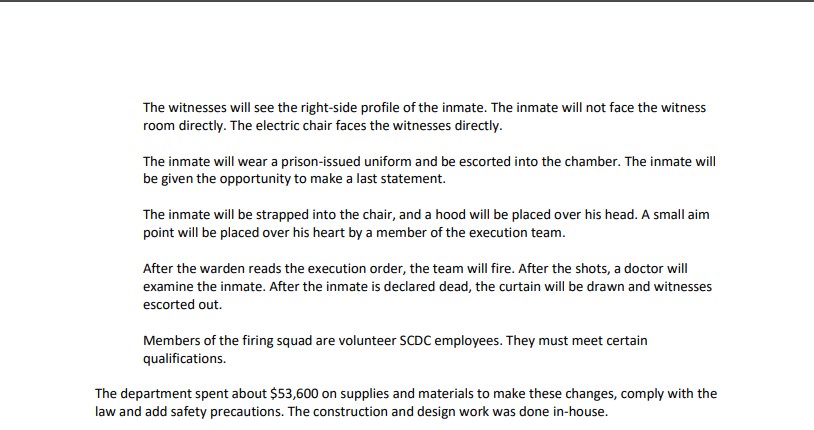 The renovations cost about $53,600, according to the SCDC.

Mississippi, Oklahoma, and Utah are the other three states that allow death by firing squad. Just three people have been executed in such a manner since 1976, NPR reported.

I say bravo to South Carolina for coming up with a solution, instead of letting justice not be administered in the Gamecock state.

For those who take innocent life, their life should be required of them, or as the left likes to say when pushing social justice causes, it would ensure “equity”, though they would disagree with the application in this circumstance.

“Justice” hypocrites will object to this additional method of execution, like others, since they are pro-criminal, not pro-victim, any longer.