My wife and I occasionally discuss what careers we might have chosen after graduating, many years ago, if we knew then, what we know now. Of the professions that we discussed, for me, teaching was nowhere on my list.

The teaching profession has a lot of pressures associated with it, especially for those who are members of the ever-evolving, radical national teachers’ unions.

Instead of being allowed to focus solely on teaching standard curriculum, including reading, writing, arithmetic, and science, they are now expected to be social justice activists of varying degrees. In far-left schools, this could include introducing young minds to Critical Race Theory, The 1619 Project, Intersectionality, and the problems of “white privilege”.

In addition, schools in states like California have acquiesced to racial justice activists, who are demanding the schools take extreme measures in trying to prevent “students of color” from being expelled, for nearly any reason.

Students can threaten their teachers, not do their school work, and/or miss several days of school, without getting expelled, simply because of the color of their skin.

In a sad and shocking story, according to a local news network, a Florida teacher needed to be taken out of her classroom on a stretcher after being assaulted by one of her students, a five-year-old student.

The student, who reportedly had previously assaulted the teacher several times, was taken into police custody. According to the news report, the young child likely won’t face charges because he is, quote, “too young in the eyes of the law.” The law basically says the five-year-old assailant, quote, “doesn’t know right from wrong at this point.” 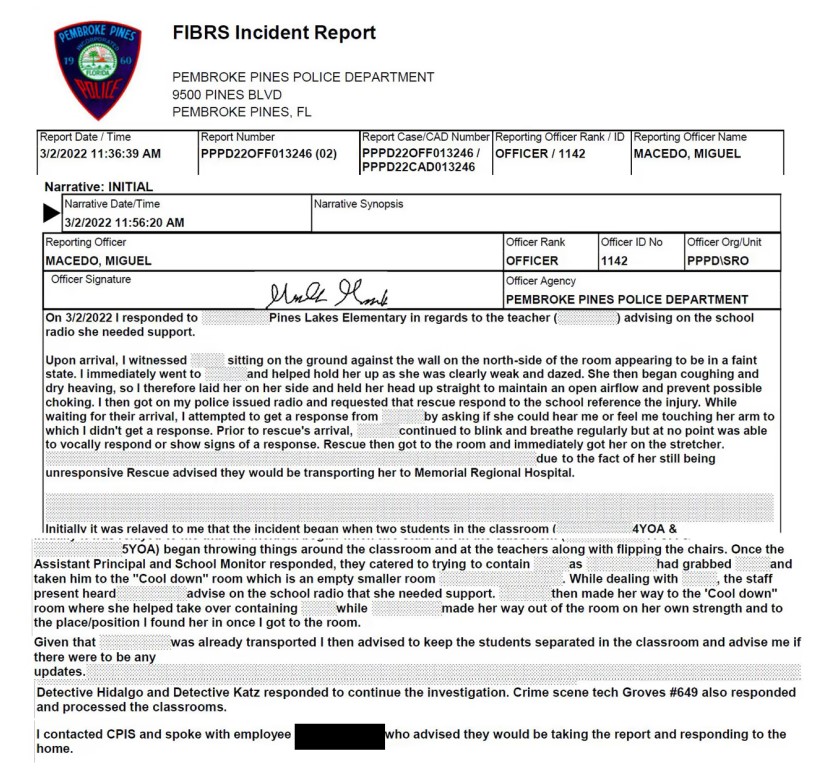 The incident in question took place on Wednesday at a school for special needs.

The teacher of thirteen years fell backward, hitting her head, and was found unresponsive by police.

But the Local 10 News blog post cites a police report stating the five-year-old attacked the teacher with “his fists and his feet.” A police spokesperson reiterated that charges were unlikely because the boy is, “under the age of reasoning.” However, the incident is still being investigated, and that, “things can change.”

The teacher’s union president claims this was the third time this teacher needed to be taken from the school by first responders because of injuries sustained by this student. The teacher has a concussion after this third attack. She is recovering at home.

So what happens moving forward at Pine Lakes Elementary?

Will the student get assigned to a new teacher, moved to another school, or be required to switch to home learning from the safety of his parent’s residence?

One thing is for sure, the safety of the teacher needs to be put in front and center for once. This 5-year-old should get extra care for whatever emotional or mental issues he is struggling with.