The world’s 4th richest man is concerned about what you are eating. In an interview with MIT Technology Review, he said that “rich nations should shift entirely to synthetic beef.”

Bill Gates is the top private owner of farmland in the United States. He reportedly owns over 269,000 acres of farmland. Why would someone fundamentally opposed to raising cattle own more farmland than anyone else? 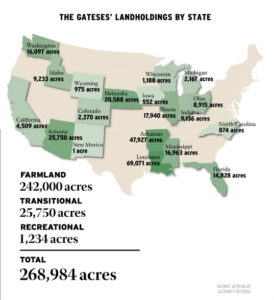 Some could theorize that Gates may have a diabolical plan to control meat consumption in the United States. But with over 895 million acres of farmland in the United States, I find it hard to see Bill Gates’ 242 thousand acres making a dent in the entire farming industry.

However, others see things very differently!

Forbes reports that Bill’s interest in farmland doesn’t stop in the United States. His known interests range from Africa to South Asia.

While it may be surprising that a tech billionaire would also be the biggest farmland owner in the country, this is not Gates’ only foray into agriculture. In 2008, the Bill and Melinda Gates Foundation announced $306 million in grants to promote high-yield, sustainable agriculture among smallholder farmers in sub-Saharan Africa and South Asia. The foundation has further invested in the development and proliferation of “super crops” resistant to climate change and higher-yield dairy cows. Last year, the organization announced Gates Ag One, a nonprofit to advance those efforts.

It is not entirely clear how Gates’  farmland is being used, or whether any of the land is being set aside for conservation. (Cascade did not return Forbes’ request for comment.) However, there is some indication that the land could be used in a way that aligns with the foundation’s values. Cottonwood Ag Management, a subsidiary of Cascade, is a member of Leading Harvest, a nonprofit that promotes sustainable agriculture standards that prioritize protections of crops, soil and water resources.

So what is it? Is Bill Gates really worried about cow farts destroying the planet, or does he have a sinister plan to control food sources?

For countries to change to 100% synthetic meats, governments would have to enforce an extreme policy change. Before 2020, no one in the U.S. thought that such monstrous policies could ever be enacted here. China maybe, but here, no way!

We learned from the events of the past couple of years that if governments decide to push policies that they deem suitable for the “good of the people,” they will steamroll over any objecting party, person, or protest, regardless of the rights and freedoms they trample.

The Western Journal insert this scary comment into one of their articles:

“Eventually, that green premium is modest enough that you can sort of change the [behavior of] people or use regulation to totally shift the demand,” he said.

Bill Gates thinks that he should champion the cause, but he is also a big promoter of government compulsion!

In the MIT Technology Review interview, he did admit that it would be difficult to push people too hard.

Now I’ve said I can actually see a path. But you’re right that saying to people, “You can’t have cows anymore”—talk about a politically unpopular approach to things.