The Biden administration has been dealing with a political headache on a regular basis, his name is Ron DeSantis, the governor of the sunshine state of Florida.

What has to drive the administration crazy, is the judge who just shot down their last national mask mandate, in the transportation industries, including airlines, resides in Florida too.

“There should be no mandates period,” the governor said during a stop in Destin, Florida.

“None,” he continued, calling the airline mandate “one of the most cruel” rules and blasting the unscientific approach, calling their moves a “charade”:

On Tuesday, DeSantis pointed out in a video on his Twitter account that Florida was the epicenter for ending the mask mandate.

“It’s fitting that the Free State of Florida was home to the ruling that unmasked millions of Americans on airplanes and other forms of transport. Biden needs to drop any appeal attempts and acknowledge the misery he imposed on so many of our airline employees and passengers.”

It’s fitting that the Free State of Florida was home to the ruling that unmasked millions of Americans on airplanes and other forms of transport.

Biden needs to drop any appeal attempts and acknowledge the misery he imposed on so many of our airline employees and passengers. pic.twitter.com/ZbRui7A939

DeSantis continued in his Destin speech:

This is COVID theater but what it is they are trying to prolong the misery that these flight attendants have had to deal with. Did you see the flight attendants were crying? They were so happy when they repealed when the judge ruled that they didn’t have to be forced masked all day when they’re in the airplanes, all the most of the passengers were having a great time saying how, what a relief it was. And so when you see that and you realize there’s no real data behind this, why would you then try to appeal this, which is basically trying to reimpose mandates that’s going to just prolong the misery for people. So I think it will be totally outrageous if they, if they appeal this decision, I think that they have decided that they are going to do it. I don’t think they’re going to seek an immediate stay, which in some respects may even be worse because you are going to have this decision in effect. People are not going to be having to wear a mask and then if they win the appeal, you could reinstitute it somewhere down the line. That doesn’t make any sense whatsoever, and I think we’ve just got to get beyond this.

DeSantis then asked why these officials are continuing to pursue forced masking and concluded that it is at least partially because “they like to exercise power over the people that they govern.”

“They like to be able to take decisions out of your hands and force a mask on your face, force kids to muzzle, force people to lose their job if they don’t take a COVID vax —  all the things they’ve done to use the coercive power of the state to take away your freedoms over the last two years,” he said, pointing to how his administration continually fought against these coercive edicts, earning its nickname as “the Free State of Florida.”

“We never imposed a mask mandate in this state. We made sure kids were in school five days a week all the way back in 2020 when no other major states were doing that. we made sure everyone could work businesses like this could operate and we said nobody should lose their job based on these jabs,” he said.

“There’s a reason why we led the nation in domestic tourism in 2021, why we even beat New York and foreign tourism and why we never had such a strong year for domestic,”  the governor continued, explaining that it is a direct result of individuals fleeing oppression and flocking to a place that protects their freedoms.

DeSantis left the podium with a final warning concerning the resiliency of activism. He cautioned voters, reminding them that those who are “inclined to lockdown policies” will “absolutely try to do it again” after the midterm elections are over.

“They will absolutely do it, so the only way to be sure that it doesn’t happen again is to not elect anybody who embraces those policies,” he added. 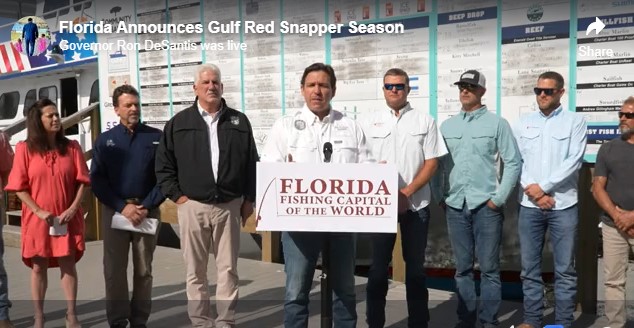 For conservatives, Governor DeSantis is on fire in Florida, with a growing number calling for him to run for president in 2024.

I personally hope Ron waits until 2028 to run for the Oval Office. President Trump can accomplish a lot starting in 2025, by not having to worry about re-election and Florida needs to continue to lead the nation in the fight for liberty.