Parents who were thought to be church-going pillars of the community have been charged with the murder of their adult daughter who suffered with Locked-In Syndrome.

Sheila, 64, and Clay Fletcher, 65 left their 36-year-old daughter Lacey Ellen Fletcher to waste a way on a living room couch. Lacey’s body was found half-naked in an upright position submerged in a hole in the rotting couch, covered in urine, faeces, live bugs and rodent excrement in her evil parent’s home in Slaughter, Louisiana.

The house was otherwise clean and tidy – suggesting the neglect of their daughter was purposeful and malicious.

“The scene was sickening. I’ve seen some horrible things in my life but nothing like this,” said East Feliciana Parish Coronor Dr. Ewell Bickham III.

“It’s unconscionable, something you make horror movies about,” he said.

Lacey’s depraved parents, who were supposed to be her caregivers, had called authorities on January 3 because their daughter had stopped breathing, and that’s when the police uncovered the gruesome way Lacey had been forced to live and die.

She was suffering from Locked-In Syndrome, a rare condition which causes the brain to lose voluntary control over the nerves and muscles, eventually leading to complete paralysis of the entire body except the eyes.

Although Lacey was unable to move or speak, according to the Rare Disease Database, Locked-In Syndrome rarely has any effect on the patient’s ability to think or their consciousness, so perhaps even more horrifyingly, she would have been completely aware of her desperate situation.

When he arrived at the scene, Bickham told the Daily Mail the smell was so bad “it almost made you run out of the house.

“The parents were in the kitchen. They did not have an explanation,” he said.

Bickham estimated that Lacey had been dead at least 24-48 hours before he examined her body and ruled her death the result of medical negligence. Despite her serious condition, he said Lacey had not seen a medical professional in around 20 years, and he estimated that she had been left to literally rot on the couch she died on – which her body was fused to – for around 12 years. 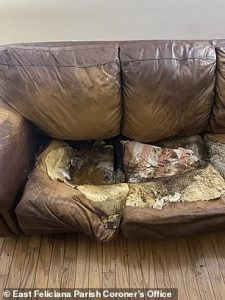 Lacey’s parents were thought to be up-standing members of the community. Sheila’s LinkedIn page says she was on the town’s Board of Alderman and Clay was a leader in the non-profit Baton Rouge Civil War Roundtable.

They were regular church goers, although many of their friends at church and even neighbors had “no idea there was another person in that house,” said Birkham.

The couple’s lawyer Steven Moore issued a statement to say they “don’t want to relive the pain of losing a child through the media. They have been through a lot of heartache over the years. Anyone who had lost a child knows what it’s like.”

The Fletcher’s case will go up against a grand jury on Monday. Bickham says the photographs of the grizzly scene are so disturbing they will speak for themselves:

“I probably won’t even have to open my mouth the pictures will show it,” he said.