Survivors of the NYC subway shooting have described the terrifying moment a ruthless gunman pulled weapons including an ax and a gun from a duffle bag before opening fire on passengers.

One man said the attacker quipped “oops, my bad”, before reaching into the bag and deploying a gas canister, filling the subway car with smoke, before opening fire on the panicking passengers.

It was a miracle no one was killed during the terrifying ordeal, but ten passengers were hit by the spray of bullets as the gunman fired around 33 shots.

Fitim Gjeloshi, a passenger in the subway car, described the moments leading up to the incident. He said the gunman, who is still at large, was “talking to himself” and Gjeloshi said he thought he might be on drugs:

“I looked him, and I thought to myself he was talking to himself for a while, so I looked at him, and I was like, ‘This guy must be on drugs,” he explained to the New York Post.

“When [the train] was about to hit 36th street, we stopped for 5 minutes. He takes out a gas mask from one of his little luggage[s]. He opened one of his gas tanks, and he said, ‘Oops, my bad’. He pulls out an ax, he drops it, he takes a gun out, he starts shooting.

The NYPD mounted an intense manhunt for a gunman who set off a smoke bomb and opened fire in a New York subway car, injuring at least 17 people in a morning rush-hour attack https://t.co/mBC5haq2md pic.twitter.com/xz8NOc2hBp

“One guy gets shot right next to me. He says, “Help! Help!

“I tell some person to help him out, cover the blood for him. I jump over, I bang the door and I kicked it with my leg.”

Another passenger was shot in the back of the knee as he tried to help a pregnant woman get away from the gunman.

Hourari Benkada, 27, told CNN he was in the worst pain of his entire life as the bullet passed through his knee and out the other side.

“It sounded like the loudest thing I ever heard in my life”, said Benkada to New York Daily News.

“We were trying to break the door, and the train took forever to reach the station. Once it opened at 36th St., I was in so much pain.”

As smoke filled the carriage, survivors say the passengers clambered to get away from it, perhaps suspecting it could be poison gas, and grouped at the other end of the subway car.

Unable to escape the moving carriage which was between stations at the time of the shooting, they were trapped inside as the carnage ensued.

As the car pulled into 36th Street Station, Sunset Park, passengers who had been shot were laying on the blood-smeared floor as the gunman successfully fled the scene.

No one was killed in the shooting, but 23 were injured, 10 were shot with 5 requiring hospital care.

13 suffered “respiratory distress” from the smoke and others were injured in the rush to escape. All the victims are expected to survive.

Police have offered a $50,000 reward for any information which could help them locate Frank James, 62, who they have deemed to be a ‘person of interest’ in relation to the attack. 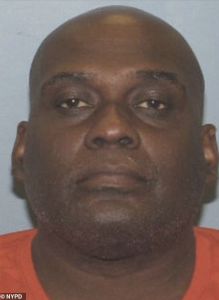 NYPD list Frank James as a   ‘person of interest’

Cops say the motive for the shooting remains unknown but say they recovered a key to a van at the crime scene which had been rented by James in Philadelphia.

Crime rates continue to climb in Democrat-led NYC, with overall crime up by 44.3 percent from last year and shootings up by 8.4 percent according to NYPD statistics.