She’s so fuming about Musk’s comments – and presumably, his public announcement that he would be switching his vote to Republican from now on didn’t help – she says she wants to swap her $46,990 Model 3 Tesla with a different electric brand of car:

“At the time, it was the only EV that could get me from New York to Washington on like one, or one-and-a-half charges,” she told Bloomberg. She had bought the car to travel between her district in Bronx-Queens and Washington during the Covid pandemic in 2020.

“I would love to switch,” said the Green New Deal-backing Democrat, saying she would only consider buying Ford’s huge F-150 Lightning truck or a Chevy Bolt.

AOC claimed her sudden change of heart about owning a Tesla was because she wanted to support a manufacturer with a unionized production line. Still, many have questioned the coincidental timing of her announcement.

Mocking AOC’s Tweet last month in which she said she was “tired of having to collectively stress about what explosion of hate crimes is happening because some billionaire with an ego problem unilaterally controls a massive communication platform,” Musk jokingly responded with “Stop hitting on me, I’m really shy.” 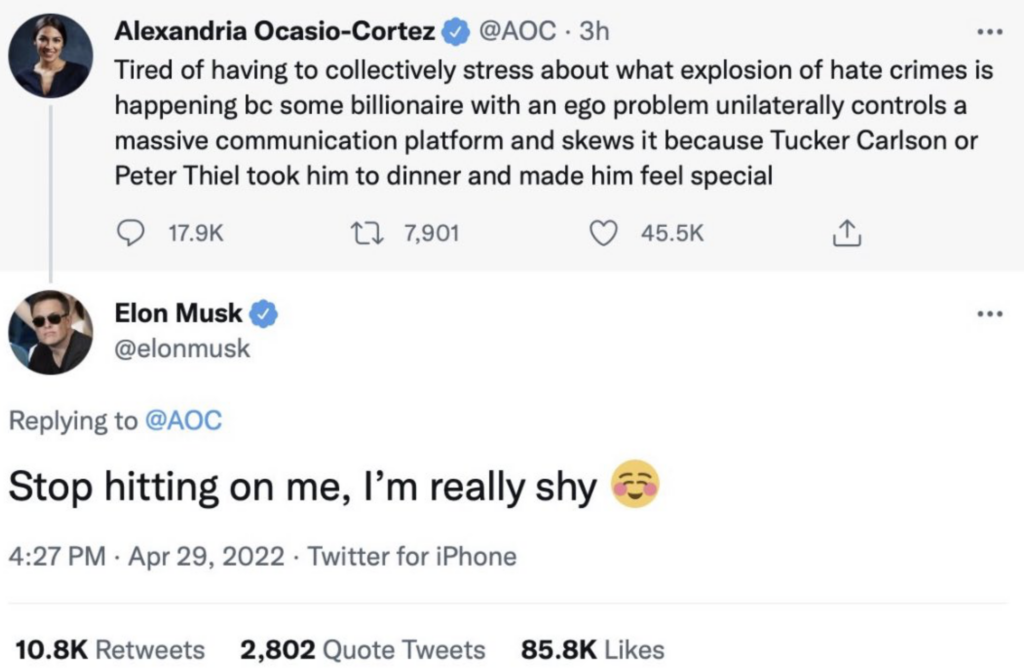 Musk’s comment was a tongue-in-cheek response to Ocasio-Cortez’s previous claims that her critics want to date her:

“If Republicans are mad they can’t date me they can just say that instead of projecting their sexual frustrations onto my boyfriend’s feet,” she embarrassingly remarked.

“It’s starting to get old ignoring the very obvious, strange deranged sexual frustrations that underpin the Republican fixation on me, women, LGBT+ people in general,” she added while supporting a party that wants to teach kindergarteners about gay sex.

Claiming that she didn’t want to give Musk any attention following the Twitter spat with the Tesla CEO, AOC deleted her original Tweet:

“I try to avoid giving people with massive ego complexes like this the attention and QTs/replies they crave and are seeking (when I can help it ).

“If he’s looking for something to do, he can pay taxes,” she added.

In 2021, Musk paid around $11 billion in taxes, but don’t let facts stop your rant, Alexandria!

When Bloomberg pressed her about the timing of her shunning of Tesla just after Musk had announced his decision to support the GOP after previously voting Democrat, AOC said: “He’s a billionaire. I could care less what he thinks”.

AOC is ringing in the new year with Martini’s in Miami!

How did it feel to enter restaurants with out showing papers?

How did it feel to flea your state with the highest Covid infections in the country?

Perhaps even more embarrassing for her than her constant, hypocritical moaning about Republicans, AOC was caught enjoying a very unsocial-distancy drink with her fiancé Riley Roberts in Miami in December, which, under Ron De Santis’ leadership, remained relatively restriction-free while her district continued with strict rules:

“Nice to see AOC enjoying the Florida freedom and sunshine, but it’s sad that school children in NYC are forced to eat lunch outside in freezing temperatures this winter due to the draconian and useless COVID policies pushed by AOC and her fellow progressives,” said Florida Gov. Ron DeSantis.

AOC had come under social media fire earlier that year after she reportedly parked her Tesla illegally outside her luxury apartment building in Washington DC.

This story syndicated with permission from Jo Marney, Author at Trending Politics