As gasoline prices hit another record high on Tuesday, baby formula is becoming difficult to get and pricing continues to increase on items backed up because of the Covid lockdowns in China, the average American continues to look to the White House for some clarity and a plan to fix the mess.

Until today, the Biden administration via Pres Secretary Jenn Pasaki has deflected the inflation numbers by placing the blame on the Russian invasion of Ukraine, the GOP leadership, and former President Trump’s fractured relationships with foreign leaders.

On Tuesday President Biden during a press briefing on the economy, held at the White House-adjacent Old Executive Office Building, finally admitted that soaring inflation was “a real tough problem to solve” and warned it could get worse before it gets better — while offering no new ideas to stem rising prices. 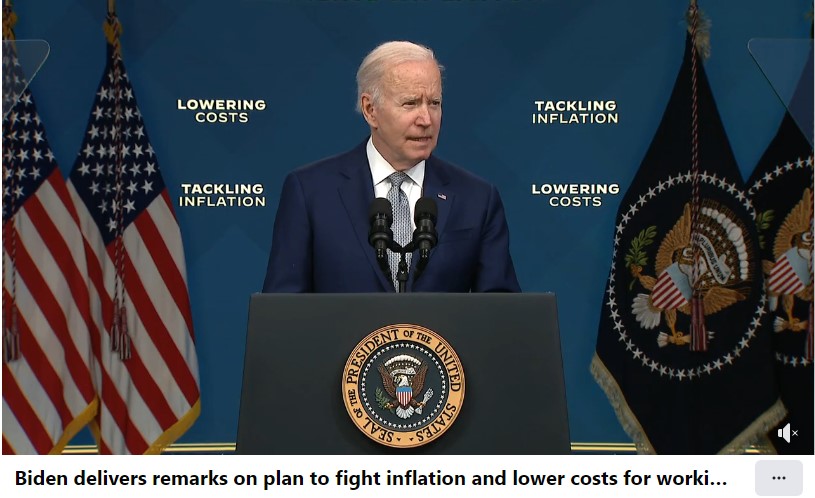 “I think our policies help not hurt. Think about what they say. The vast majority of the economists think that this is going to be a real tough problem to solve but it’s not because of spending,”

Reporter: “Do you take any responsibility for inflation?”

Biden: “I think our policies help, not hurt. pic.twitter.com/0sCMmjRfkM

Unlike the solid team of financial advisors President Trump surrounded himself with, Biden’s team pushed for massive fiscal stimulus spending, such as the $1.9 trillion Covid-19 relief bill, which many economists have said fueled inflation.

“It’s really complicated. I’m not suggesting American people can’t understand it. They understand it, but they have, you know, they’re working eight, 10 hours a day just to put food on the table,”

Biden declined to predict how long it would take for prices to start coming down — then suggested they may actually rise even higher through 2023.

“I’m not going to predict that,” he told reporters. “It ranges depending on which economists you’re talking to — by the end of this year and some say it’s going to be, it’s going to increase next year. But there’s others who say by the end of this year, you’re gonna see it come down, by the [end of the] calendar year. I don’t know, but I know what we have to do to make sure that we can bring it down.”

Annual inflation hit 8.5% in March — the highest rate since 1981 — after Biden assured the public last year that smaller price hikes were temporary.

Asked about polls showing large majorities blame him for high inflation, Biden said, “All they’re focused on, understandably, is the problem they’re facing.”

“They get a five-and-a-half percent raise, average raise, in their salaries. And yet inflation exceeds that. And they look around the world and they know that a lot of it’s extremely complicated, and so they’re frustrated, and I don’t blame them,” Biden said.

Biden noted that he had allowed gas companies to increase the amount of ethanol in fuel blends this summer to lower prices, but blasted oil companies for not drilling more while “shipping record profits to their investors.” He also touted his proposed legislation to transition to renewable energy sources, but lamented, “You need 60 votes [in the Senate] to get major things done.”

Biden also tried shifting the debate about inflation onto what he believes the Republicans might do if they retake control of Congress in the fall midterm elections.

Biden attacked Sen. Rick Scott (R-Fla.), chairman of the Republican Senatorial Campaign Committee, for suggesting that all Americans pay at least some taxes. Biden said that could result in the demise of Social Security and higher costs for millions of people.