In the far left’s push for societal deconstruction, transgender activism has superseded the LGBTQ movement. The latest argument from this group is there is no longer a standard definition of what a woman is.

In the following video of the confirmation hearing of Judge Ketanji Brown Jackson, the first black woman nominated to the Supreme Court, she refuses to define the word “woman” on the grounds that, as she put it, “I’m not a biologist.”

Jackson made the comment during an exchange with Sen. Marsha Blackburn (R-Tenn.) in which the lawmaker asked the DC Circuit Court of Appeals judge point-blank: “Can you provide a definition for the word ’woman’?”

After a short back-and-forth, Jackson ultimately said: “No, I can’t.”

Matt Walsh is a conservative political commentator has recently been addressing this issue head-on, even appearing on Doctor Phil with trans activists.

As Pro-abortion rights protesters and women participating in the Women’s March gathered across the country in Los Angeles, New York, and Washington, D.C., they were met with a question plastered on billboards and written in the sky: What is a woman?

The Daily Wire and Matt Walsh put up the advertisements promoting Walsh’s quest to find an answer to this most basic of human identity questions.

Yet, in the midst of being intentionally ignorant, the activist that Walsh has been encountering are illogically replacing science with how a person feels. It is the basis of his upcoming documentary, What Is a Woman?

“Hey LA Women’s March, look up,” Walsh captioned a tweet that showed “What is a woman?” sketched in the sky.

Along with the question in the sky, an airplane circled the city with a sign directing people to WhatIsAWoman.com.

In Washington D.C., a truck drove around flashing an advertisement for the documentary as pro-abortion rights protesters gathered to oppose the leaked Supreme Court majority opinion draft signaling that the court is preparing to overturn Roe v. Wade.

A What is a Woman? digital ad also popped up in New York City, where a billboard asked, “If you can’t define what a woman is, how can you have a women’s march?” 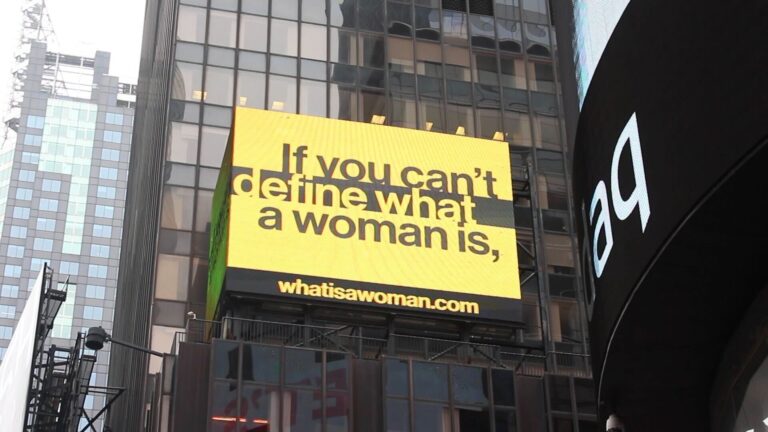 The question even started trending on Twitter as protests and marches continued throughout the day.

Please respect their feelings,” Walsh tweeted along with a screenshot showing that “#WhatIsAWoman” was the 11th most popular topic on Twitter.

“Weird that #WhatIsAWoman just disappeared from the trending topics entirely when it was number 9 just a moment ago,” Walsh commented.

The billboards, skywriting, and Twitter hashtag are the latest attempts by Walsh to get leftists to come up with a logical definition for the biological term for which they are supposedly marching. Whether or not he gets an answer will only be seen in his upcoming documentary.

My thanks to the Daily Wire and Matt Walsh for putting out this documentary. It is much needed in this time of gender confusion among those who have drunk too much of the arrested development Kool-Aid.