The NFL’s Carolina Panthers will open the next season with the newest member of their cheerleading squad, Justine Simone Lindsay. Lindsay becomes the NFL’s first openly transgender cheerleader. Move over, Michael Sam.

In a post shared on Instagram this week, the cheerleader shared the exciting news of joining the rest of the Topcats on the gridiron. Lindsay revealed not only the aspect of joining the roster but the “historical” aspect of being the first open transgender.

“Cats Out the Bag you are looking at the newest member of the Carolina Panthers TopCats Cheerleader’s as the first Transgender female,” the post said.

Lindsay added: “I would like to thank the beautiful and talented dancers who supported me along the way alumni Topcats family and friends for your love and support. I would not have gotten to this moment in my life if it wasn’t for the support. Also to my beautiful coach [Chandalae Lanouette] you are a special being that I truly cherish thank you taking that leap of faith on me to be apart of your legacy and so many others.”

“This is a moment I will never forget and I cannot wait to show you all what this girl has to bring. Thank you Topcats a dream come true,” the post ended. 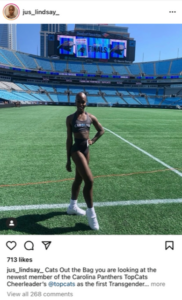 According to the Daily Mail, Lindsay will be able to keep the bald head.

And while Lindsay made the announcement this week on Instagram, Panthers TopCats cheerleading director Chandalae Lanouette likewise confirmed the hiring on Buzzfeed.

The Daily Wire covered some of the interviews in their own report:

“Lanouette said she was aware Lindsay was transgender by the cheerleading application but insisted it was Lindsay’s “talent,” not the cheerleader’s “history-making” that landed Lindsay a spot on the squad, the BuzzFeed report outlined.

“My goal is to create a team of individuals that are absolute fire on the field but are incredible human beings in the locker room, good friends, good people, and at the end of the day, you have to walk through the door first to get to that spot,” Lanouette said.”

The NFL loves itself some woke equity, and this hiring announcement is right up their alley. On the one hand, most people don’t care what someone is so much as who someone is. Are you a decent human being that treats others well? On the other hand, when is enough enough? It’s bad enough a mostly-white nation pays to watch and cheers on mostly-black athletes and gets called racist for doing so. Now the NFL will likely invent a new reason as to why no one pays attention to cheerleaders.

In fact, given the minimal attention paid to cheerleaders as well as the influence of events such as the #MeToo movement, where even the most harmless male attention could be construed as assault, it felt like the entire notion of cheerleading was going to disappear entirely.

Inclusion issues aside, though, does anyone care who cheerleads? Anyone that has spent time in high school and collegiate sports has seen plenty of co-ed cheerleading squads. Some might argue those are better since the men on the team can typically launch their smaller peers into the air for quite impressive flips and twirls.

Obviously, though, the issue here isn’t about men joining the team, is it?

Hailey Sanibel fiercely loves freedom. She is a contributing author at Trending Politics and writes regularly at The Blue State Conservative.