The authoress who rose to international stardom after the success of her Harry Potter book series has faced relentless attacks by left-wing radicals over the past few years for criticizing the trans agenda and standing up for women’s rights.

Over the weekend, Rowling, 57, Tweeted her support for the butchered author who was stabbed in the neck and torso at a literary festival in New York on Friday by Iran sympathizer, Hadi Matar.

Rushdie is reportedly in stable condition in hospital but suffered severe nerve damage to his neck which may result in him losing one eye and liver damage from a stab wound to his stomach.

Since the attack, social media has been awash with vile comments from terrorist supporters who have applauded Matar’s actions.

Meer Asif Aziz whose Twitter profile says he is a “student, social activist, political activist and research activist” based in Karachi, Pakistan posted insensitive “jokes” about how Jewish Israel should be destroyed.

“Dear leader your struggle for Islamic world will not be wasted until we young generation are with you”.

Sickeningly, Aziz, who in previous posts referred to Matar as a “revolutionary freedom fighter”, responded with, “Don’t worry you are next”.

.@TwitterSupport any chance of some support? pic.twitter.com/AoeCzmTKaU

“@TwitterSupport any chance of some support?”

Twitter is infamous for allowing minority groups and Muslim or left-wing extremists to say whatever they please and yet perma-banning right-wingers for ‘minor’ offenses – or just for nothing at all.

Later, Rowling up-dated worried fans to say that she was thankful for the “supportive messages” and that the “police are involved (were already involved on other threats)”.

Worryingly, Twitter is awash with vile posts in support of Matar’s attempted murder.

One account with the username ‘Fatima’ (which is an Islamic term for a death threat, which Iranian religious leaders issued against Rushdie in the 1980s), posted a painting of Matar showing the terrorist smiling as he’s arrested while wearing an Islamic bandana.

The account wrote: “After 33 years, Hadi Matar completed what Mostafa Mazeh started. Their hearts had been chanting sincerely “Labbaik Ya Imam” (which roughly translates as “here I am, leader”). 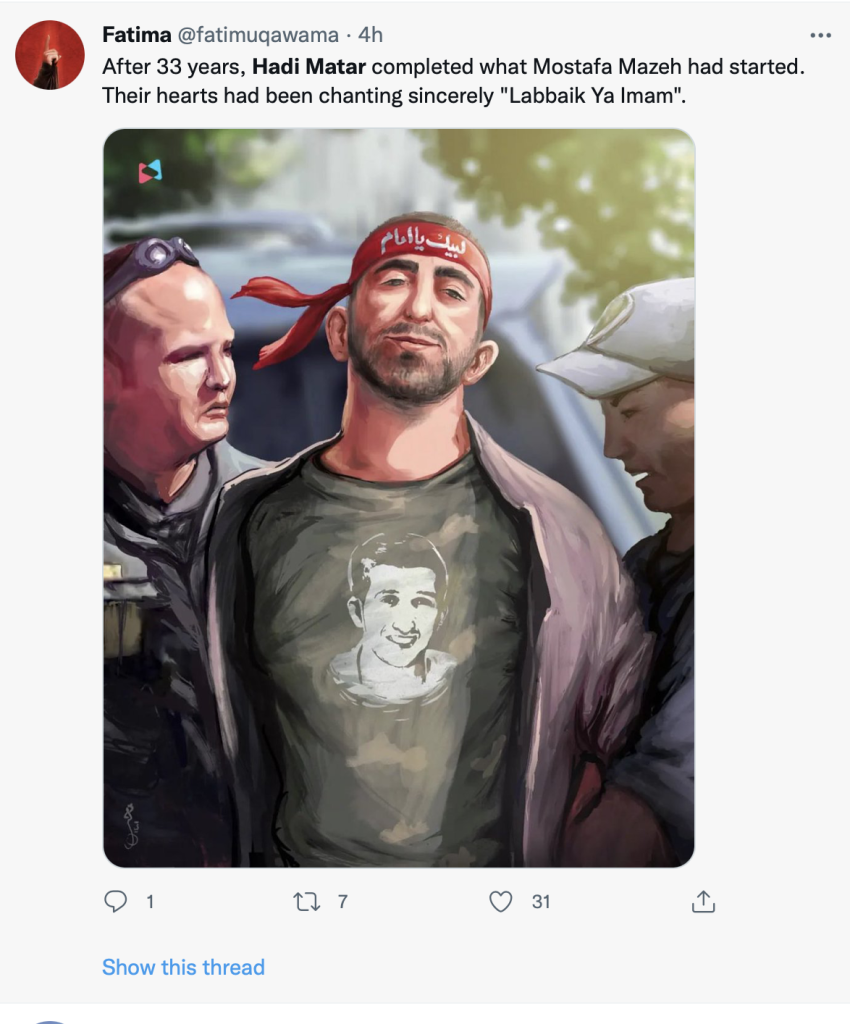 Another warped Twitter user who goes by the name ‘Anticipate Love’ with a Canadian maple leaf symbol next to the @ tag, posted a photograph of Matar covered in love hearts and captioned the image with:

“The real hero of Muslim Ummah #HadiMatar” along with two love heart emojis. 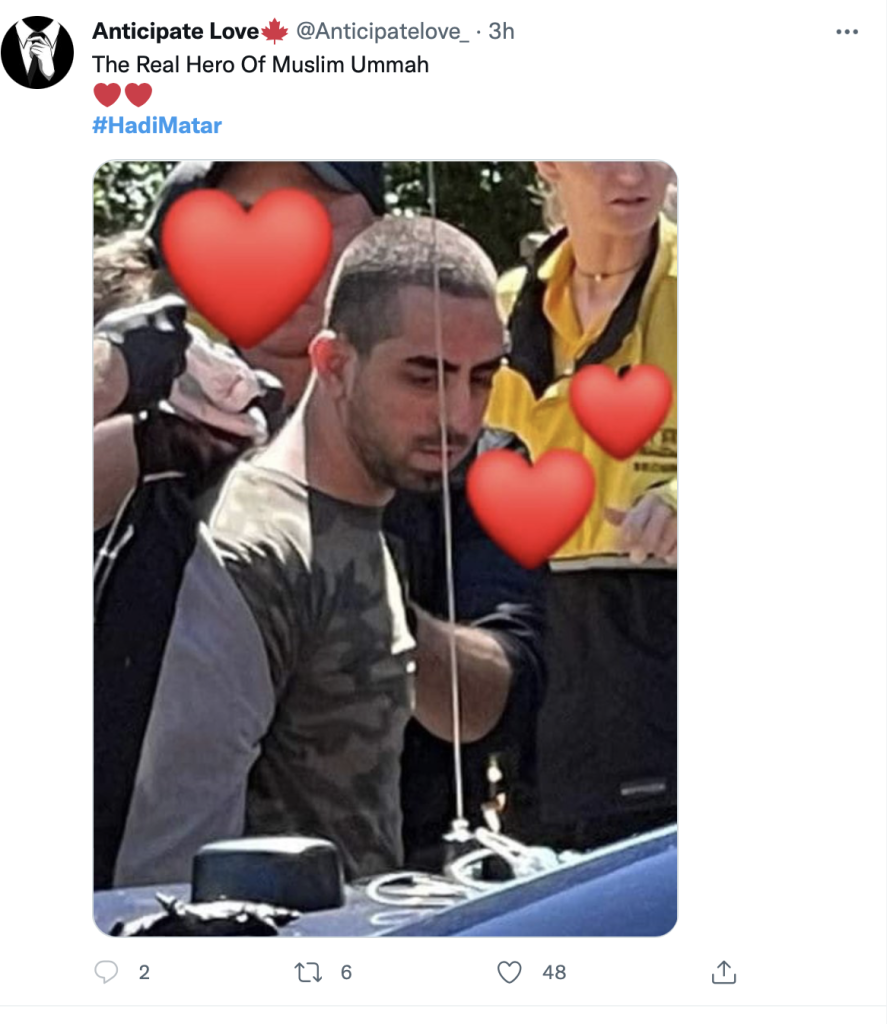 Another user commented on the post to ask “What’s the story behind Salman’s assassination?” to which the poster commented, “He was the author of his [sic] book blasphemous in its portrayal of our Prophet Mohammed”.

A “student of Arabic”, Khadija Qureshi commented on her support with, “Indeed” with a black heart symbol.

Sickeningly, Mohammad Hassan, a Tweeter from Iran posted a photograph of Matar being arrested and said:

“Thank you Hadi Matar for your great efforts. He was a Lebanese Shia Muslim”. 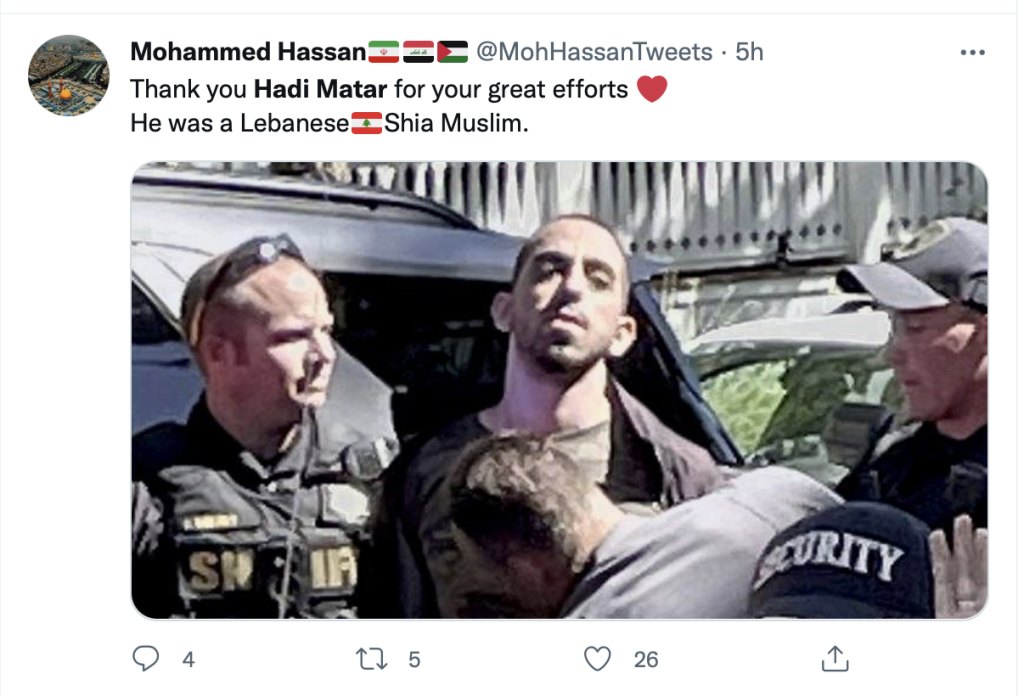 As someone in the comments section accused him of being a Hezbollah terrorist, Hassam cooly replied:

“If Hezbollah is classified as terrorist for defending Lebanon against its enemies then I am the biggest terrorist you have ever met!

“Hezbollah of Lebanon is my favorite party.”

So far, none of the accounts have been removed by Twitter.