Former President Donald Trump now claims that the FBI blocked lawyers from watching the raid on the Mar-A-Lago residence and now hopes that FBI agents weren’t planting evidence in the building. The raid took place earlier this week after an investigation over 15 boxes of documents that people claim Donald Trump took from the White House, alleging that he took some documents that were marked as “classified.”

Trump denies this, of course, but the raid still took place after a search warrant got the FBI into the residence. Trump posted about it on Truth Social, the platform that works similar to Twitter. These are Trump’s words about the incident, but it remains unclear what actually happened during the raid and what is true/untrue.

Trump said: “The FBI and others from the Federal Government would not let anyone, including my lawyers, be anywhere near the areas that were rummaged and otherwise looked at during the raid on Mar-a-Lago. Everyone was asked to leave the premises, they wanted to be left alone, without any witnesses to see what they were doing, taking or, hopefully not, “planting.” Why did they STRONGLY insist on having nobody watching them, everybody out? Obama and Clinton were never “raided,” despite big disputes!”

Two attorneys, Lindsey Halligan and Christina Bobb, were on the scene during the raid of Mar-A-Lago. Halligan said she was forced to stay outside of the residence. She said her and Bobb were not allowed to go inside during the raid and had to stay outside, near the ballroom and residence, on the premises of the residence, as reported on CBS. Halligan didn’t see things going into the building, but that does not mean it did not happen. Witnesses did see agents taking boxes out of the residence and into vehicles. It’s unclear what was in the boxes.

See the screenshot of Trump’s post, thanks to Daily Caller: 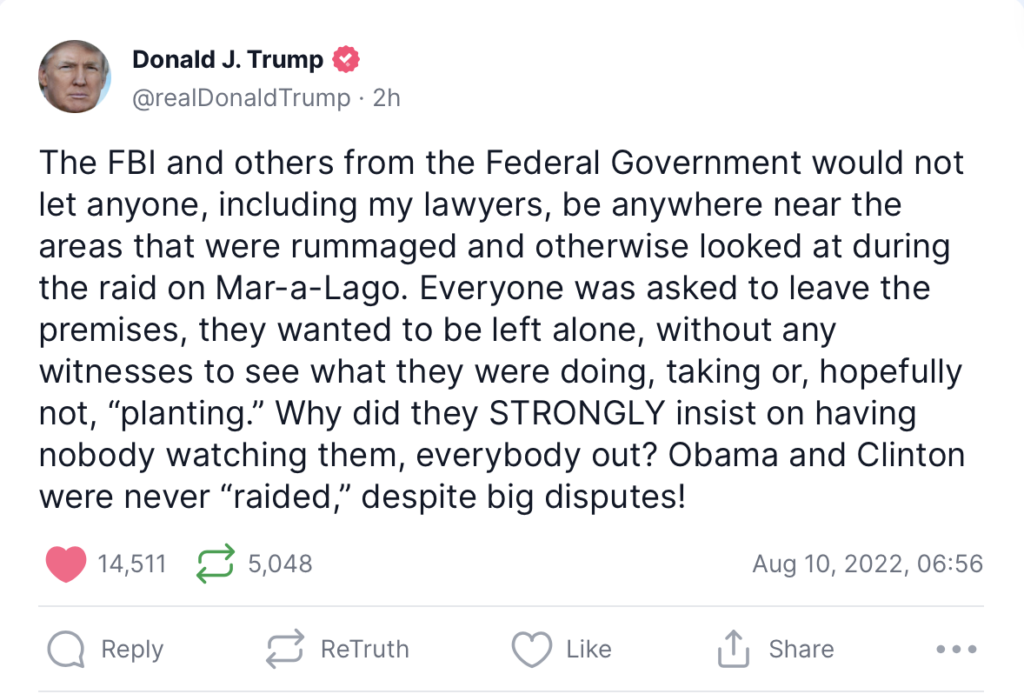